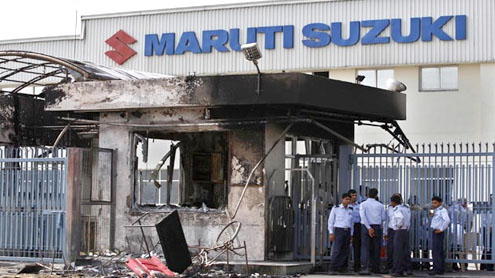 India’s top carmaker Maruti Suzuki has suspended production at a plant near New Delhi after a manager was burned to death and scores of others injured in a riot by angry workers.

Maruti identified the dead man as the plant’s personnel manager, Avnish Kumar Dev, whose charred body was found after the rampage late on Wednesday during which supervisors were attacked and offices set on fire.“We are deeply disturbed by the mob violence,” Maruti said in a statement that praised Mr Dev as “deeply committed to cordial industrial relations” at the Manesar plant 50km from the capital.

Maruti shares plunged nearly 9 per cent to 1117.35 rupees ($19.46) on investor fears of a lengthy shutdown. Last year, the company’s operations were crippled by a long dispute over pay and union recognition.The carmaker, owned by Japan’s Suzuki Motor, said the plant’s offices were “burnt beyond repair” while nearly 100 of its managers had to be hospitalised, some with serious injuries.

The workers, some wielding iron rods, fanned out in groups, beating managers “on their head, legs and back, rendering many of their victims bleeding and unconscious”, the company said.
A number suffered broken bones, head wounds and other injuries, a Maruti executive said, while two Japanese executives, including the Manesar plant manager, were also in hospital with undisclosed injuries. – PT