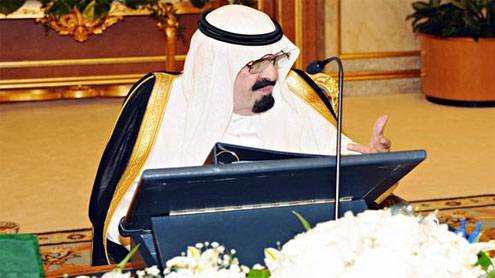 Custodian of the Two Holy Mosques King Abdullah and Crown Prince Salman, deputy premier and minister of defense, last night greeted the people on the blessed month of Ramadan, which begins today.

The king and the crown prince prayed to the Almighty to unite the ranks of the Muslims and enable them practice the values of the religion in their lives, Culture and Information Minister Abdul Aziz Khoja said while reading out their joint message.”In this blessed month, in its days and nights, the noblest Islamic values are spread. The big sympathizes with the small, the rich supports the poor and the entire society shows mercy and affection bringing out the radiant image of Islam and how it shaped the Ummah and how its civilization was established stressing on justice, tolerance and mutual support,” the statement said.

Today (Friday) is the first day of Ramadan, the Saudi Press Agency reported quoting a Royal Court statement. The king has ordered partial opening of the new courtyard of the Grand Mosque in Makkah today. It will accommodate 200,000 more worshippers.The holy month also attracts millions of Umrah pilgrims from all parts of world besides hundreds of thousands from within the Kingdom.

Across the Middle East, religious authorities also declared that Friday as the start of the holy month, a period devoted to dawn-to-dusk fasting, prayers and good deeds.Official statements issued Thursday in Egypt, Lebanon, Jordan, Qatar, Libya and Yemen said the holy month will start the following day.Egypt’s newly elected President Muhammad Mursi used the occasion to issue a pardon of 572 civilians sentenced in military tribunals, tackling a major demand of pro-democracy activists. But the pardon only affects a fraction of the thousands of civilians who have been tried and sentenced by military tribunals since a council of generals took over following Hosni Mubarak’s ouster in February 2011.

Activists say over 11,000 were tried in military tribunals. A spokesman for a committee investigating the issue said Thursday more than 2,100 remain in prisons.This year, the long and hot summer days are expected to compound the already tough fast which slows the pace of life and changes daily routines.Mursi urged Egyptians to observe working hours to improve the country’s compounded security problems and debilitated services.

Mursi, who was sworn in less than 20 days, became the region’s first popularly elected Islamist leader. He has yet to name a new government, and has kept the military-backed government in place until he appoints what he promised would be a national unity Cabinet.This is the second Ramadan since the outbreak of protests in the region against longtime rulers. Despite the slower pace of life during the holy month, last year, protests picked up in Syria and rebels in Libya took the capital Tripoli, unseating longtime dictator Muammar Qaddafi. – Arabnews

The Open 2012: Adam Scott takes early lead as major rivals Tiger Woods and Rory McIlroy line up behind him