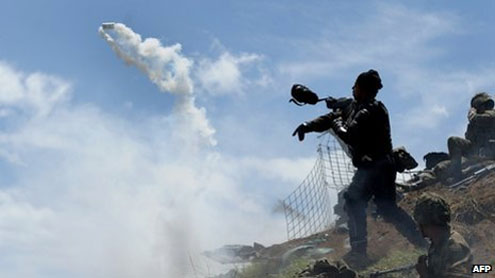 Police in Colombia have driven members of an indigenous group from a strategic mountain top they were occupying.

More than 20 people were injured in the clashes in Cauca province, in Colombia’s south-west.Nasa tribesmen had taken the army post on Cerro Berlin on Tuesday and forced the soldiers stationed there to leave.The Nasa say they are tired of being caught in the middle of confrontations between the security forces and members of the Farc rebel group.Early on Wednesday, police used tear gas to remove the indigenous group from Cerro Berlin, some two hours from the town of Toribio.Local official Jose Miller Correa said 24 people had been injured in the police operation, three of them seriously.

Anti-riot police were sent to Cerro Berlin after tribesmen carrying sticks had driven about 100 soldiers from the army post they were guarding on the mountain.The Nasa say they want the soldiers to leave Toribio and the surrounding area because their presence attracts attacks by Farc rebels.Toribio has come under rebel attack 14 times since the beginning of the year.Indigenous leader Marcos Yules said his people wanted all armed men, be it rebels or members of the security forces, to leave.

Last week, an indigenous commission marched to Farc camps surrounding the town and gave the rebels a two-week deadline to pull out of the area.Colombian President Juan Manuel Santos has said the government will hold a meeting with Nasa representatives, but only once they stop occupying the army post.”I don’t want to see a single indigenous person on our military bases; that’s the order,” he wrote on his Twitter account on Wednesday.

He said he would not permit any attacks against Colombian soldiers.”Troops have the firm order not to give up one centimetre in Cauca or any part of national territory,” he wrote.The government announced that army commander for Cauca province, Gen Miguel Perez, had been relieved of his post.Cauca province is a Farc stronghold. It is used by the rebels and criminal groups as a key corridor for drug smuggling. – BBC