Another ship joins US Navy 5th Fleet in Arabian Gulf 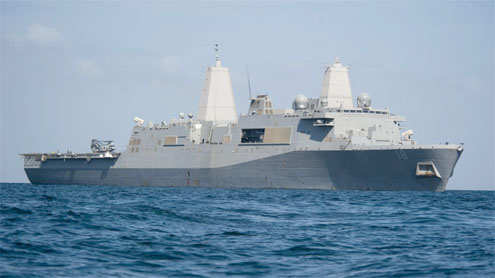 Two weeks after the arrival of four mineweeping ships to bolster the US Navy’s 5th Fleet in the Arabian Gulf, an Afloat Forward Staging Base (AFSB-I), the USS Ponce has joined the fleet.

The Ponce is a former amphibious transport dock, which has been spared retirement and ‘converted’ and ‘reclassified’ as an AFSB (I) or a ‘mothership’ for several operations, mainly to support mine countermeasures. The US Central Command had earlier requested for such a ship and the retrofitted vessel will also serve as a floating base for helicopters, coastal patrol ships and special forces.

The navy said the Ponce’s main mission is to support mine countermeasures operations. This warship can also provide repair service to other deployed units, including electrical, diesel engine, piping, and machinery repairs. ‘‘Additionally, Ponce also has the capability to embark and launch small riverine craft,’’ said a US Navy statement.

Vice Adm. John Miller, commander, US Naval Forces Central Command, said: “Ponce’s role as an AFSB provides us with an enhanced capability to conduct maritime security operations, and gives us greater flexibility to support a wide range of contingencies with our regional partners.”

“The versatility of Ponce, combined with the teamwork of its ‘hybrid’ crew, brings a unique capability to the region.” said Capt. Jon Rodgers, commanding officer of Ponce. “As the first dedicated Afloat Forward Staging Base, we look forward to working closely with our coalition and regional partners to promote security and stability,” he said

This mothership will have a crew consisting of approximately 150 Military Sealift Command civilian mariners and 55 US Navy Sailors. Sailors will be primarily responsible for operations, while the civilian personnel will man the engineering, deck and damage control departments, according to the statement.

The 41-year old vessel was originally scheduled to be retired in March 2012. Ponce is a 548-feet ship and was built to carry Marines, landing craft and aircraft for amphibious landings as part of an expeditionary strike group. – Khaleejnews

Justice Dept., FBI to review use of forensic evidence in thousands of cases