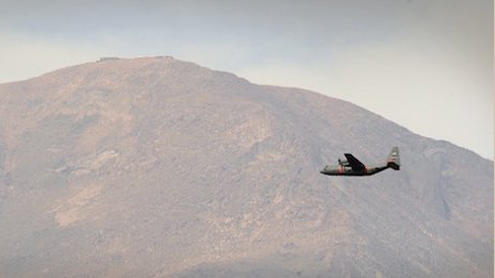 President Barack Obama said he and all Americans send “deep condolences” to the families of those killed in the crash of a C-130 military cargo plane, which was helping to fight wildfires in the Black Hills of South Dakota.

Obama hailed all of the airmen taking part in efforts to battle blazes ravaging Western states as “heroes.”  Six crew members were aboard the North Carolina Air National Guard aircraft when it went down Sunday night. A military official told the Associated Press that some survived.  “I know Americans across the country share my concern for the well-being of the surviving members of the crew and my deep condolences to the families of those who lost their lives,” Obama said in a  statement.  “The full details are still under investigation, but the crew of this flight—along with their families and loved ones—are in our thoughts and prayers,” the president said.

Obama traveled to Colorado last week to view firsthand the efforts to battle the worst wildfires in the state’s history.  “The men and women battling these terrible fires across the West put their lives on the line every day for their fellow Americans,” he said in his Monday statement.”The airmen who attack these fires from above repeatedly confront dangerous conditions in an effort to give firefighters on the ground a chance to contain these wildfires—to save homes, businesses, schools and entire communities,” he said. “They are heroes who deserve the appreciation of a grateful nation. “And I know that Americans join me in expressing my deepest gratitude for the selfless determination they and thousands of men and women involved in this fight in states across the country demonstrate every day,” Obama said.-Yahoonews