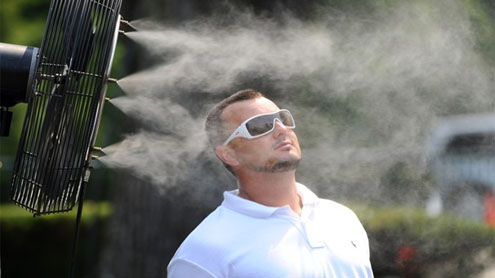 The Washington region suffered through another day of stifling heat Sunday, and thousands of people went without air conditioning as utilities called in reinforcements and the National Guard pitched in to help with storm cleanup.

The heat index topped 100 again, and sultry weather was forecast for the entire Fourth of July week as legions sought refuge from sweltering homes and waited for work crews to make repairs.In Washington, the city canceled public school summer classes and programs for Monday, citing power outages. Twenty members of the National Guard were sworn in to patrol intersections with broken traffic signals.

By late evening Sunday, about 538,000 Washington area households and businesses — about one in four of the region’s electric customers — were still without power, according to data on utility Web sites.Montgomery County also canceled summer school classes and programs for Monday and Tuesday, and Prince George’s County did the same for Monday.The federal government said its offices in the area would be open, but employees have the option to take unscheduled leave or do unscheduled telework.

The loss of hundreds of traffic signals and some 911 service, as well as numerous road closures, could make for a chaotic commute Monday morning, officials said.Many households had power restored Sunday, but the area remained partially crippled by the vast crescent of storms that swept across the Appalachians on Friday night, killing at least five people in the region. And Sunday, as people perspired, dogs panted and officials said it might be a week before all power is restored, politicians vowed to try to speed things along.

Many people used generators to produce electricity. Five people in the District were taken to hospitals Sunday with carbon-monoxide poisoning, and officials said generators should never be operated indoors.Sunday was the area’s fourth day of 90-degree-plus readings, with more such weather in sight and a continuing chance for more storms. Just before 4 p.m., the temperature at Dulles International Airport reached a record for the day of 96 degrees, breaking the record of 94 set in 1968.The National Weather Service predicted slightly cooler readings for Monday. But it warned of extremely hot and threatening weather again midweek, with heat indexes of 105 and readings in the 90s through the weekend.

Meanwhile, utilities scrambled to borrow extra repair crews from nearby states, but fewer were available because of the extent of the storm’s damage.The highest level of outages at one point Sunday — 60 percent — was reported for Pepco’s service to Montgomery.As of 10:30 p.m. Sunday, a total of 167,668 customers with Pepco, Baltimore Gas and Electric and Potomac Edison in Montgomery remained without power.Across Prince George’s at that time, 103,361 Pepco and BGE customers customers were still without power.There were 208,285 Dominion Virginia Power and Northern Virginia Electric Cooperative customers without power at 10:30 p.m. And in the District, Pepco reported 58,977 without power. – WP