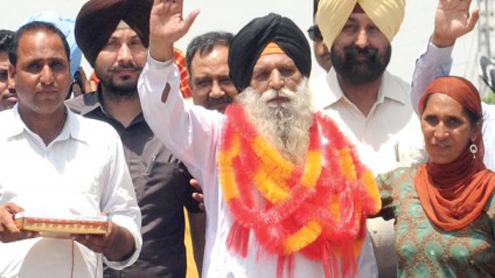 Lahore – Indian prisoner Surjeet Singh, along with 315 fishermen, was handed over to the Indian authorities at Wagah border on Thursday.

Indian spy Surjeet Singh was freed from Lahore’s Kot Lakhpat Jail early on Thursday after serving 27 years in prison since he was arrested on charges of spying. With a smile on his face, Surjeet hugged his Pakistani lawyer who was waiting for him before being taken away for completion of formalities to enable him to cross into India.

He was welcomed by his immediate family members from Ferozepur and around 300 villagers at the Wagah Border. After his arrival at the Wagah Border, he told anxious reporters that he was extremely delighted to return home to reunite with his family members after 30 years. Surjeet also confessed that he had been sent to Pakistan to spy for the Indian Army.“I will never return to Pakistan again,” Surjeet, who has a grey flowing beard, told reporters in Punjabi with his head and finger indicating a firm “no” gesture. -Pakistantoday