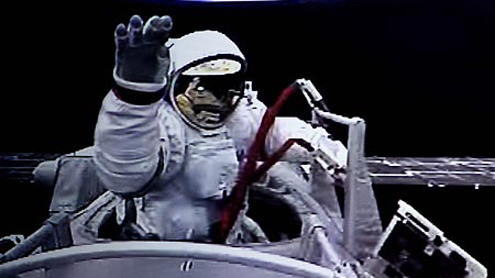 BEIJING: China‘s first woman cosmonaut and two of her colleagues returned to Earth on Friday after successfully accomplishing the country’s first-ever manual space docking during a two-week mission, giving a boost to Beijing’s efforts to build a space station by 2020.

The spacecraft Shenzhou-9 carrying the three astronauts landed at the designated spot at Inner Mongolia region. The landing, which was shown live on the television was a bit bumpy as the module turned upside down as it hit the ground. Ground stations declared that the landing was successful. The first Chinese woman astronaut Liu Yang, and her two male colleagues mission commander Jing Haipeng and Liu Wang were safe.

The return capsule of Shenzhou-9 spacecraft touched down this morning, after China fulfilled its first manned space docking, state run Xinhua news agency reported. The two-week space mission was a key step towards building a space station, which China aims to do by 2020,  The touch down monitored by various ground stations took place at 10 am Beijing time as was announced earlier.  The module aided by a huge parachute was seen landing almost at the designated site in the grasslands of inner Mongolia. The ground search and rescue team moved toward the landing site as soon as the capsule landed.  -Thetimesofindia