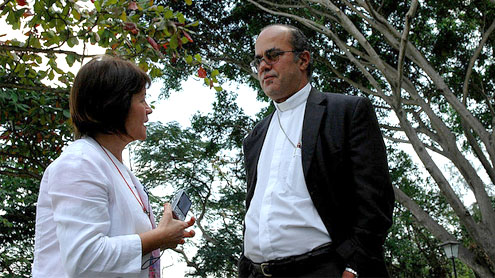 The Pope has accepted the resignation of an Argentine bishop after the publication of pictures showing him embracing a woman on a Mexican beach.

Bishop Fernando Bargallo, 57, was photographed in the sea, hugging a woman in a bikini.He initially said she was a childhood friend, but later admitted to having had “amorous ties” with her.Bishop Bargallo was in charge of the diocese of Merlo-Moreno, in the province of Buenos Aires.The scandal broke last week, when an Argentine television station broadcast pictures of Monsignor Bargallo on holiday at a beach resort in Mexico in the company of a woman.

In one of the pictures, he is seen half-submerged in the water, embracing a woman in a bikini.Shortly after the pictures were published, Monsignor Bargallo gave a public statement saying that the woman was a childhood friend, whom he had known all of his life.He said the situation in which he had been photographed was “imprudent, as it could lead people to jump to the wrong conclusion”.

He asked his flock to forgive him for “the ambiguity of the pictures” and urged them to view the photos “in the context of a long friendship”.But later that same week, Monsignor Bargallo convened the priests of his diocese and told them he had had “amorous ties” with the woman and would resign.The Vatican said he would be replaced by Monsignor Alcides Jorge Pedro Casaretto. – BBC