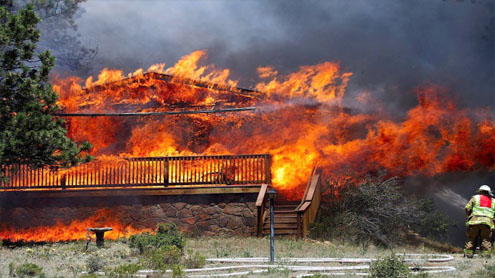 COLORADO SPRINGS, Colo: Tens of thousands of Colorado Springs residents forced from their homes by a raging wildfire took refuge with friends or family and crammed into hotels and shelters as Army troops helped firefighters protect the U.S. Air Force Academy from the flames.

The blaze was burning out of control early Thursday in the mountains and within Colorado’s second-largest city, after more than 30,000 evacuees frantically packed up belongings and headed out their doors.The wildfire was one of many burning across the parched West, blazes that have destroyed structures and prompted evacuations in Montana and Utah and forced the closure of a portion of Zion National Park.

Shifting winds Wednesday challenged firefighters trying to contain the 29-square-mile Waldo Canyon blaze and extinguish hot spots inside Colorado Spring’s western suburbs. The National Weather Service reported 60 mph winds and lightning above the fire Wednesday afternoon, but winds were calmer by nightfall.“It won’t stay in the same place,” said incident commander Rich Harvey.Neighborhoods where explosions of bright orange flame Tuesday signaled yet another house had been claimed were still dangerous, keeping authorities away from being to assess the damage.

Ed and Florine Gigandet took refuge in a hotel in Manitou Springs, which days earlier had been evacuated when the same fire passed through. They fled their home as ash fell on their driveway from an ominous orange smoke overhead.Trying to learn about damage, the Gigandets drove to near their west Colorado Springs neighborhood to talk to police officers and see the area. They scoured media photos and spent hours on the phone with friends for any scrap of information. Authorities told the Gigandets it could be at least week before they’re allowed home.

“We only packed clothes for four days,” Florine Gigandet, 83, a retired photo printer, said. “I really thought that we’d be gone for only a day.”The displaced residents took stock of what they left behind. Some sat in coffee shops, others stood on bluffs to keep an eye on their neighborhoods, and others met with insurance company representatives.The fire moved so fast that Laura Oldland grabbed damp laundry out of her drier and threw it into a suitcase. But she forgot her grandmother’s dishes.

The Gigandets, avid golfers, left their clubs behind. “We should be out golfing,” said Ed Gigandet, 81, a retired mining machinery sales analyst.Meanwhile, the White House said President Barack Obama will tour fire-stricken areas of Colorado on Friday and thank firefighters battling some of the worst fires to hit the American West in decades.Colorado Springs Police Chief Peter Carey said Obama’s visit to Colorado, considered a key battleground state in the presidential election, would not tax the city’s already-strained police force. Gov. John Hickenlooper said he expected the president might sign a disaster declaration that would allow for more federal aid.The fire burned about 10 acres along the southwest boundary of the Air Force Academy campus. No injuries or damage to structures — including the iconic Cadet Chapel — were reported. – WP