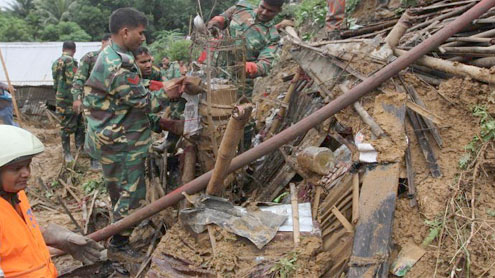 CHITTAGONG: More than 90 people have been killed in landslides in southeast Bangladesh after three days of rains that triggered flash floods and severed transport links, officials said Wednesday.

The army has been deployed to help with rescue efforts in the affected hill region of Chittagong, said the region’s chief administrator, Sirajul Haq Khan, who warned that the death toll could rise as more remote areas are accessed.According to Khan, at least 94 people died in a series of landslides and flash floods in and around Chittagong port and the neighbouring districts of Cox’s Bazar and Bandarban.

Bandarban administrator Tariqul Islam said 36 bodies have been recovered from multiple landslide sites.”Rescue efforts had been hampered as communications have been largely snapped because of flash floods and heavy rain,” Islam told AFP. – Brecorder