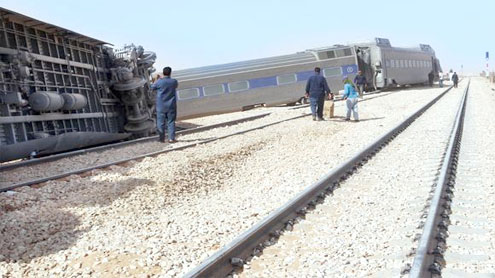 Thirty-five people were injured after a Dammam-Riyadh train carrying 332 passengers derailed yesterday near Al-Khurais junction, about 70 km from Riyadh. Two of the injured were seriously hurt.

The accident took place at Takahzin district No 10.An official spokesman for the Saudi Railways Organization told Arab News: “Thank God, there were no deaths. The accident did cause injuries of varying degrees to some passengers.“The train’s engine and three compartments went off the rails and flipped over, while the remaining carriages also went off track but did not overturn.“The reason for the derailment could not be ascertained immediately.”

The railways emergency technical team and police, Saudi Red Crescent and Civil Defense were on the scene within minutes.Saeed Al-Ghamdi, Red Crescent spokesman in Riyadh, said some of the injured were given first aid on the spot while 19 were taken to hospitals.According to him, two of the victims were airlifted to hospital for further treatment.He said 18 Red Crescent teams took part in the rescue operation.However, Capt. Muhammad Al-Hammadi, spokesman of the Civil Defense Department, gave another version.

He said of the 19 injured, two were airlifted on a security plane while others were given first-aid treatment by the Red Crescent.Some with minor injuries were taken to Al-Eman Hospital located in the south of Riyadh.Riyadh Gov. Prince Sattam was monitoring developments closely and his deputy Prince Muhammad bin Saad visited the main railway office in Riyadh to receive an update on the conditions of those being treated in hospitals.The SRO said it has launched an investigation into the accident.The ill-fated train was the day’s first among many passenger trains to Riyadh from Dammam. The accident occurred around 9 a.m.

The distance between Dammam and Riyadh is 400 km and trains usually take about four hours to complete the distance.Mohammed Y. Bu-Hulaigah, acting public relations manager at SRO, said: “The accident led to the total blockage of the passenger line between Al-Khurais and Riyadh, forcing the authorities to suspend all trains to and from Riyadh.“However, the train service to Abqaiq and Hofuf from Dammam continued uninterrupted.”Immediately after the accident, Hamed Al-Abdul Qader, acting head of the Saudi Railways Organization, instructed his staff to arrange alternative transport for the passengers and to provide them with all necessary facilities.

A special train was sent from Riyadh to evacuate the passengers from the accident site. The railway authorities arranged buses to transport passengers of Train No. 3 from Hofuf to Riyadh while the tickets of passengers booked on trip No. 4 from Riyadh to Hofuf, Abqaiq and Dammam were refunded.Bu-Hulaigah added: “We also sent SMS messages to passengers informing them of the suspension of trains from Riyadh due to the accident, asking them either to seek refunds for their tickets or rebook on another train.”

Train No. 3, which had already left Dammam for Riyadh at 8:56 a.m., had reached Hofuf at 10.26 a.m. The train was supposed to reach Riyadh at 12.59 p.m.The railway authorities made arrangements to ferry the stranded Riyadh-bound passengers in Hofuf to Riyadh by buses.There were three Indians among the injured — Sridhar, Abdul Aziz and Mohammed Nowfel. Nowfel said he heard a bang when the accident took place.He said the authorities took good care of the injured and stranded passengers.Mohammed Rasooldeen, Siraj Wahab & Muhammad Al-Sulami contributed to this report. – Arabnews