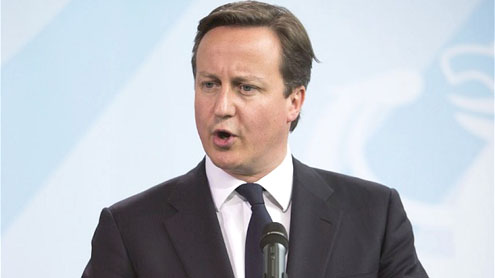 In a major speech, the Prime Minister will indicate that out-of-work families will not qualify for extra benefits if they have more children and that young unemployed people may be forced to live at home under plans to cut the welfare bill by another £10 billion.

He will say that unemployment benefit may be “time-limited” and the £26,000 cap on welfare handouts for each household may be further reduced.Universal benefits for pensioners such as the winter fuel allowance and television licence will be protected, he will say, despite pressure from Liberal Democrats and Iain Duncan Smith, the Work and Pensions secretary, for them to be means-tested.

In the speech he will say: “We need to think harder about who receives working-age welfare. If it is a real safety net, then clearly it’s principally for people who have no other means of support, or who have fallen on hard times. But there are many receiving today who do not necessarily fall into these camps.“The time has come to go back to first principles; to have a real national debate and ask some fundamental, searching questions about working-age welfare; what it is actually for; who should receive it; what the limits of state provision should be; and what kind of contribution we should expect from those receiving benefits.”

Pensioners currently receive benefits worth £107 billion, including the state pension, compared with £54 billion paid to working-age people. Universal benefits, such as the £200 winter fuel allowance, free TV licences and free bus passes cost almost £4 billion annually – almost equal to the budget for Jobseeker’s Allowance.However, the Prime Minister is understood to have ruled out cutting the benefits in the next spending review, which will set Government spending between 2014 and 2017.Sources believe it is highly unlikely that Mr Cameron would sanction any means-testing or scrapping of these benefits while he remains in office.

In today’s speech he will say: “There is a debate about some of the extra benefits that pensioners can receive – and whether they should be means-tested. On this I want to be very clear: two years ago I made a promise to the elderly of this country and I am keeping it. I was elected on a mandate to protect those benefits – so that is what we have done.”Instead, Mr Cameron wants to draw up a new round of cuts to the welfare paid to those who could work.The Prime Minister will suggest that the entire welfare system should be redesigned to remove incentives for people claiming benefits to have more children.

“Quite simply, we have been encouraging working-age people to have children and not work, when we should be enabling working-age people to work and have children,” the Prime Minister will say.“So it’s time we asked some serious questions about the signals we send out through the benefits system. Yes, this is difficult territory. But at a time when so many people are struggling, isn’t it right that we ask whether those in the welfare system are faced with the same kinds of decisions that working people have to wrestle with when they have a child?”Mr Cameron will highlight official statistics showing that more than 150,000 people claiming income support for more than a year have three or more children.

He will warn that working people “have to think very carefully about whether they can afford to have children” but the unemployed are encouraged financially to have bigger families. The Government is expected to propose limiting child benefit and other handouts so that it is only paid for the first three children.The Prime Minister will also indicate that he is considering introducing a time limit for unemployment bene– fits. The Conservatives previously considered introducing a maximum of, for example, two years for claiming unemployment benefits. He will today also suggest that benefits should be made conditional on people taking more active steps to find work.

The Prime Minister believes the root–and–branch reforms are necessary to tackle what he describes as the “welfare gap” which is fostering tension in society.He will say the gap is “between those living long–term in the welfare system and those outside it. Those within it grow up with a series of expectations: you can have a home of your own, the state will support you whatever decisions you make, you will always be able to take out no matter what you put in.”Mr Cameron will warn that it now “pays not to work” and will describe the “culture of entitlement” that has meant welfare claimants believe they are entitled to “something for nothing” and “has led to huge resentment amongst those who pay into the system”.

The speech is the latest in a series of traditional Conservative policy announcements designed to shore up Mr Cameron’s position after a series of mistakes in the spring over the Budget and party donations.However, many of the policies are expected to be blocked by the Liberal Democrats and the Prime Minister makes clear that some of the measures are intended for the next Conservative manifesto in 2015.Labour accused Mr Cameron of “hazy and half–baked” thinking.