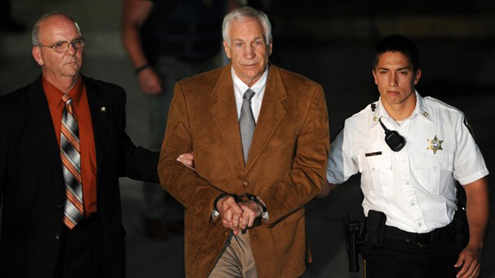 BELLEFONTE, Pa. — A jury convicted Jerry Sandusky of 45 charges of child sex abuse Friday, concluding a trial in which eight men took the witness stand to declare that the former Penn State coach molested them when they were boys.

So ended a criminal case that has shocked and horrified the Penn State community and, on a national level, cast light on the nature of pedophilia and the silence and denial that often accompany it. At about 10 p.m., the foreman of the jury stood and read the verdicts, starting with count one, “involuntary deviate sexual intercourse” — “Guilty.” Sandusky showed no reaction. One of his sons wept and shook his head as he sat behind his mother, Dottie. The Sanduskys had been prepared by their attorney for a guilty verdict after the jury took less than two days to work through a long and complicated list of charges.

After the verdict was read, the prosecutor asked for bail to be revoked. Joe Amendola, Sandusky’s attorney, argued that he be allowed to stay under house arrest. The judge ruled otherwise. “The bail is revoked,” he said. “Mr. Sandusky, you are remanded to the custody of the Centre County sheriff.” Sandusky stood, did not appear to look at his family, and calmly walked through a doorway, accompanied by three officers. Shortly afterward, he exited the rear of the courthouse, this time handcuffed, and was loaded into a sheriff’s car. An onlooker shouted “Rot in hell!”

When the news of the verdict reached a throng gathered outside the courthouse, a huge cheer went up.  Sandusky always maintained his innocence, but prosecutors surrounded him with accusers, each of whom, at the end of his testimony, told the jury that he was not making any of this up. Their words persuaded the jurors, many of whom had direct ties to Penn State, that Sandusky had used the charity he founded for troubled children to cultivate relationships with boys he could molest.

The jury, which deliberated for 21 hours over two days, rejected the argument by Sandusky’s attorneys that their client was a good man targeted by a virtual conspiracy among zealous police, prosecutors, news organizations and money-hungry civil litigation lawyers.  Andrew Shubin, an attorney who represents two victims who testified, said he relayed the verdict to his clients. “They were relieved. They lost their breath when I told them,” he said. Shubin’s law partner, Justine Andronici, said when she told “Victim 3,” a 25-year-old Iraqi war vet, about the result, he said, “Thank God he’s in jail.”

Sandusky had spent his final days of semi-freedom at home with his wife, who had testified in his support, and several of their children, according to Amendola. Absent from that final gathering was Matt Sandusky, the adopted son who this week claimed that his father had abused him.  After the verdict was announced Friday, Amendola revealed to reporters that he was told last week that Matt Sandusky had made a statement to prosecutors about the alleged sexual abuse in the early 1990s. That, Amendola said, changed the defense strategy. Had Sandusky testified, the lawyer said, the prosecution would have put the adopted son on the stand as a rebuttal witness.-Washingtonpost