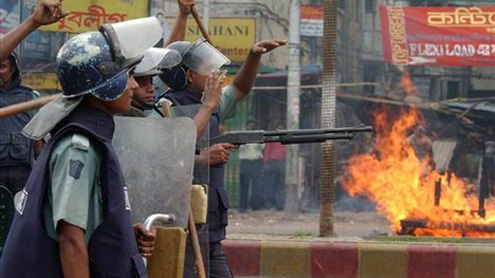 DHAKA: A four-day shutdown at more than 300 Bangladeshi clothes factories ended on Thursday after workers called off violent protests over pay, officials and witnesses said.

A long closure at the factories, which represent around 8 percent of the country’s garments manufacturing base, would have further threatened its biggest export earner, demand for which has already suffered as a result of the global economic downturn. “We decided to reopen the factories after the government assured us of adequate security while the workers agreed to ensure peaceful operation and the owners said they will consider the workers’ demands,” said Muhammad Iqbal, managing director of clothes maker the Skyline Group. Owners closed the factories in the Ashulia industrial zone, north of the capital Dhaka, on Saturday after nearly 250 people including police were injured in several days of clashes.

Workers are demanding a 50 percent wage increase to meet rising food and rent prices, but factory owners say they are unable to afford pay rises as a consequence of the impact of global downturn on exports. They said they would consider the workers’ demands when appropriate. “We welcome the move, but urge the government to mediate with the owners to review wages as the prices of almost all daily necessaries, along with house rent, have gone up,” said Nazma Akhter, president of the Garment Workers United Alliance. Without a pay rise the trouble might recur, she said. Currently, a garment worker’s minimum wage is 3,000 taka ($37) per month. Exports from Bangladesh this April fell 7.13 percent year on year to $1.89 billion, the Export Promotion Bureau said, the second straight month of declining shipments, adding to evidence that the euro zone crisis is affecting the country’s economy.

Garment products account for nearly 80 percent of Bangladesh’s export earnings, fetching more than $18 billion in the 2010-2011 financial year. “We see majority of the workers are back to work by noon Thursday,” said a police officer at Ashulia. “We have strengthened vigilance to thwart further violence,” he said by telephone. Bangladeshi factories make clothes for international brands including JC Penney, Wal-Mart, H&M, Kohl’s, Marks & Spencer, and Carrefour , who use the low-cost country as a production centre for basic garments. reuters-Dailytimes