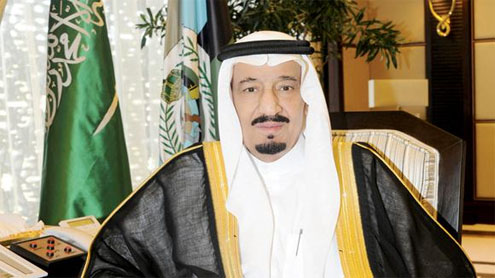 The appointment of Prince Salman as crown prince of Saudi Arabia by Custodian of the Two Holy Mosques King Abdullah sends a strong message to the world, while ensuring a smooth transition in the Kingdom and proving it is a haven of stability in a region that’s been boiling with political unrest.

Prince Salman, a veteran statesman and administrator, has been appointed the new crown prince of Saudi Arabia following the death of Prince Naif.“We have selected Prince Salman bin Abdul Aziz as crown prince and appointed him as deputy prime minister and minister of defense,” King Abdullah said yesterday in a royal decree.King Abdullah issued another decree appointing Prince Ahmed as interior minister, a post held by the late Prince Naif since 1975. Prince Ahmed was hitherto the deputy interior minister.

After the burial of Prince Naif in Makkah on Sunday, the quick elevation of Prince Salman to the second most powerful position, though expected the world over, signaled that the royal family is a real political institution by displaying unity and continuity.Their move yet again fulfilled the aspiration of the Saudi people by providing a smooth change.”It was widely expected, so it came to confirm an expectation. I think that’s an indication of the strength of the element of continuity within the system,” said Asaad Al-Shamlan, a political science professor in Riyadh.

Many analysts felt that Prince Salman would take a cautious approach to reforms, while stressing the key role he plays in handling major issues within the family.Eleanor Gillespie, a contributing editor of the London-based Gulf States Newsletter, said that Prince Salman’s job as Riyadh governor has allowed him to serve as a generally very well-respected arbiter of Al-Saud family affairs, as well as overseeing the city’s emergence as Saudi Arabia’s capital. “Salman has a reputation for probity and for being ‘clean’ when it comes to money,” she added.

“Prince Salman advocates a cautious approach to social and cultural reform. It appeared to me he had a good handle on the delicate balancing act he had to do to move society forward while being respectful of its traditions and conservative ways,” said Robert Jordan, who was US ambassador in Riyadh from 2001-03.“He doesn’t blindly accept everything the United States says, but at the same time he understands the importance of the relationship, which goes beyond oil,” Jordan added.

Jane Kinninmont, a Middle East and North Africa senior research fellow from London’s Chatham House, said: “The new crown prince may adopt a more reformist approach… But don’t expect change to come quickly or dramatically.””Crown Prince Salman is obviously the correct choice based on Saudi succession…He is well known within Saudi Arabia, but also to international delegations,” said Theodore Karazik, director of research at the Institute for Near East and Gulf Military Analysis in Dubai.

“He will be able to help pick the second generation of Saudi princes to be promoted to national level office so that the succession process continues to be steady…and will likely advance King Abdullah’s reform agenda.” Karazik said.Prince Salman’s appointment as crown prince has been widely welcomed by Saudis, expatriates and foreign diplomats. He has established strong relations with tribal leaders across the Kingdom and with many foreign heads of state.Last April, he visited the United States and Britain and met with President Barack Obama and Prime Minister David Cameron.

Prince Salman was born in Riyadh on Dec. 31, 1935, and received his education at the Prince’s School in the Saudi capital. He served as deputy governor of Riyadh from March 1954 to April 1955, and governor of Riyadh from April 1955 to December 1960 and again from February 1963 to Nov. 5, 2011, when he was appointed minister of defense.Prince Salman has played a significant role in the remarkable development of the Riyadh Province. He also made considerable efforts to strengthen Saudi Arabia’s relations with countries in the East and the West.

Since 1956, he has chaired various humanitarian and service committees that alleviated the suffering of the victims of natural and man-made disasters.He has received many medals and honors from Bahrain, Bosnia, France, Morocco, Palestine, the Philippines, Senegal, the United Nations and Yemen as well as the King Abdulaziz Medal of the First Order. He is a recipient of several honorary degrees and academic awards, including an honorary doctorate from the Islamic University of Madinah and the Kant Medal by the Berlin-Brandenburg Academy of Sciences and Humanities.

Under Prince Salman’s leadership, the Defense Ministry announced plans to modernize the armed forces and also bought sophisticated fighter jets and other aircraft from both the US and UK. In May the Kingdom signed a $ 3 billion deal with Britain to buy trainer jets for its air force. A few days ago, Salman visited Spain to strengthen military cooperation with the country.In the summer resort of Taif, King Abdullah yesterday received a number of Saudi and foreign dignitaries, who came to convey their condolences on the death of Prince Naif.