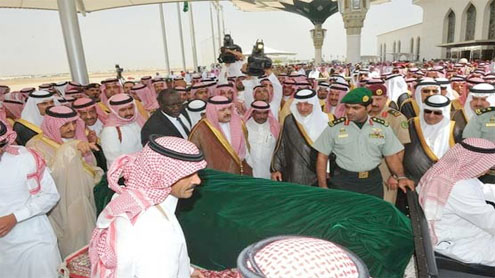 King of Saudi Arabia Abdullah bin Abdulaziz led the burial ceremony for Crown Prince Nayef bin Abdulaziz in the holy city of Makkah.The funeral prayers were attended by members of royal family and leaders and envoys from various countries.Minister for Religious Affairs Khurshid Shah and Chief of the Army Staff General Ashfaq Parvez Kayani also attended the funeral.Prince Nayef served as the Interior Minister since 1975 and was heir to Saudi King Abdullah after his appointment as Crown Prince in October 2011 after the death of his elder brother, Crown Prince Sultan.