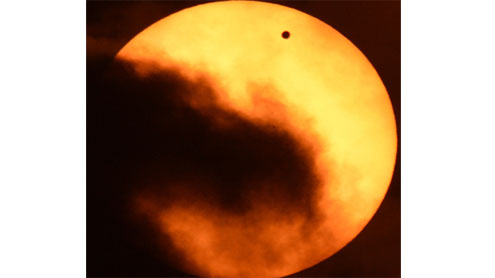 WASHINGTON: Astronomers around the world trained their telescopes on the skies Tuesday to watch Venus pass in front of the Sun, a once-in-a-lifetime event that will not be seen for another 105 years.

The transit of Venus began shortly after 6:00 pm (2200 GMT) in cloud-free areas of North America, Central America and the northern part of South America, and was visible, with magnification, as a tiny black dot on the solar surface.Eager skywatchers flocked to universities and observatories that scheduled viewings and astronomy talks for the public, some with sun-safe telescopes and others with large screens for viewing the transit.Gray skies over the US capital area did not deter some 600 people from gathering for a watch party at NASA’s Goddard Space Flight Center in suburban Maryland.

“Everyone’s having a great time,” NASA scientist Richard Vondrak told AFP. “Even though it is very cloudy and it looks doubtful that we will see the transit with our own eyes.”Instead, kids played at interactive science exhibits and viewers watched real-time images in the auditorium, broadcast by NASA, which showed the small dark circle of Venus moving slowly across the Sun.The US space agency NASA has promised “the best possible views of the event” through high-resolution images taken from its Solar Dynamics Observatory (SDO), in orbit around the Earth.

“A transit is a wonderful and rare sight; when you consider the vastness of the sky, for a planet to pass the disc of the Sun is pretty unusual — and you do have to wait until 2117 for the next one,” said SDO co-investigator Richard Harrison.The nearly seven-hour passage of the planet between the Earth and the Sun should only be viewed through approved solar filters to avoid the risk of blindness, experts warn.Sunglasses are not strong enough to shield the eyes for viewing the transit.

Specialized solar filters and glasses will be offered at some observatories, or people can make a pinhole camera or use a pair of binoculars — not held to the eyes — to project the Sun’s image onto a light-colored surface.All of the transit will be visible in East Asia and the Western Pacific. Europe, the Middle East and South Asia will get to see the end stages of the eclipse as the sun rises on June 6.Most of South America as well as west and southwest Africa will not get to see it, except by broadcasts from other locations.

Scientists say that studying the transit will boost future efforts to identify distant planets and learn more about their atmospheres.The European Space Agency’s Venus Express is the only spacecraft orbiting the hot planet at present and will be using light from the Sun to study Venus’s atmosphere.ESA and Japan’s space agency also have satellites in low-Earth orbit to observe as Venus passes in front of the Sun.And the NASA Hubble Space Telescope, which cannot view the Sun directly, will use the Moon as a mirror to capture reflected sunlight and learn more about Venus’s atmosphere.