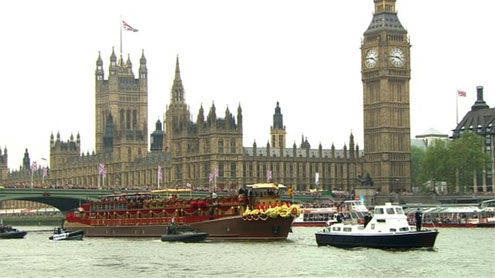 More than one million rain-soaked people have watched the Queen’s 1,000-boat Diamond Jubilee pageant weave its way along the Thames, organisers say.

The Queen’s barge travelled among the flotilla of tugs, steamers, pleasure cruisers, dragon boats and kayaks.The London event was the highlight of the Jubilee weekend, but a fly-past was cancelled because of the weather.Some 10,000 people joined a Greenwich street party, one of many in the UK marking 60 years of the Queen’s reign.The pageant – believed to be the Thames’s most spectacular in 350 years – started at Albert Bridge with the ringing of Jubilee bells at 14:40 BST and ended as the last vessel completed the seven-mile route to Tower Bridge just after 18:00 BST.

The Queen, dressed in a white hat and a silver and white coat designed by Angela Kelly, travelled on the Spirit of Chartwell, which was decorated with 10,000 flowers from the royal estates.She was accompanied by her family, including the Duke of Edinburgh, the Duke and Duchess of Cornwall, and the Duke and Duchess of Cambridge. A boat carrying eight specially-cast Jubilee bells led the water-borne procession, with churches along the river bank returning the peal as it passed. There were 10 musical barges, carrying choirs and orchestras.

The Spirit of Chartwell left Cadogan Pier once the rowing boats in the flotilla had safely passed. Leading the rowing boats was the million-pound row barge Gloriana, with Olympic gold medallists Sir Matthew Pinsent and Sir Steve Redgrave among its 18 rowers.A collection of small ships used to rescue stranded troops from the beaches of Dunkirk in 1940 also took part, led by the Motor Torpedo boat 102, the flagship of the officer who co-ordinated the evacuation.Some 20,000 people were thought to have been in the boats of the flotilla, which travelled at 4 knots (4.6 mph), with the Thames barrier closed to slow the river’s flow.

A huge cheer went up whenever the royal barge came into the crowds’ sights. Hungarian Laura Konig, 34, who lives in the London borough of Sutton, said: “I really enjoy the music. When the boats with bands come by it’s brilliant and the atmosphere is so cool. The weather could be better but apart from that it’s an amazing day.”The Queen smiled at the sight of a life-size puppet horse – from the play War Horse – which was running along the rooftop of the National Theatre. The Queen pointed out the performance to Camilla.Dozens of spectators at Tower Bridge were disappointed as security staff blocked off pathways due to fears of overcrowding, more than an hour before the flotilla was due to arrive.Tower Bridge raised as the royal barge approached, with heavy rain returning to the London skies as it moored to allow the Queen to watch the rest of the flotilla pass.

The final music barge carrying members of the London Philharmonic Orchestra and the Royal College of Music Chamber Choir stopped next to the royal barge for a short performance.As it played a nautical tune, the Queen bobbed slightly, while the Duchess of Cornwall moved in time to the music.The Guinness World Records said the pageant had set a new world record for the largest parade of boats, surpassing the previous record of 327 in Bremerhaven, Germany, last year.BBC Big Screens transmitted live coverage of the pageant in 22 locations around the UK including Belfast, Cardiff, Edinburgh, Birmingham, Bristol, Leeds, Liverpool, Manchester and Middlesbrough.

Prime Minister David Cameron paid tribute to the 86-year-old Queen during an interview on BBC One’s Andrew Marr programme earlier, saying: “Her insight and her sharpness is extraordinary and I don’t see any sign of her working less hard.” His own Jubilee party in Downing Street was moved indoors because of the weather.In Piccadilly, central London, before the pageant, the BBC’s Sangita Myska said there had been a “huge crush” as well-wishers flocked to greet a surprise visit by the Duke and Duchess of Cornwall to a street party where 500 tables had been set up.

Jubilee weekend trains into the capital were affected by overcrowding.
Organisers say six million people took part in tens of thousands of Big Jubilee Lunches across

Morecambe, Lancashire, was aiming for the longest street party by beating the 1.5 miles (2.4 km) event held in Combe Martin, Devon, for the Queen’s Golden Jubilee in 2002

Almost 9,500 road closure applications have been made across England and Wales, with Hertfordshire topping the street party list with 451 event licences

A third of all of Scotland’s street party applications have been made in Edinburgh, where 10 official events were scheduled

Hundreds of street parties took place in Wales but the weather forced some to be postponed.

The beach party at Rhosneigr, close to the Anglesey home of the Duke and Duchess of Cambridge, was rained off, but celebrations moved indoors

Jubilee events are being held across the Commonwealth. In the Arctic, explorers from Devon are holding a party. In New York, 10 UK-registered yachts will fly union jack spinnaker sails in a salute. In Afghanistan, troops at Camp Bastion held parties complete with bunting

The £10m cost of the event has been met by private donations but the security costs will be paid for by the taxpayer.The London Ambulance Service said it and St John Ambulance treated 369 patients, 64 of whom were taken to hospital. Some 46 people from the flotilla have been treated, with six taken to hospital.Anti-monarchy group Republic says more than 1,000 protesters joined its demonstration against what it calls an unelected, unaccountable monarch.

Its chief executive, Graham Smith, said most people had not been celebrating the Jubilee.He added: “Gay Pride in London gets many more people than were down here today, so does the Notting Hill Carnival, so you know it’s not that big a deal.”On Monday, a concert will be held in front of Buckingham Palace, ending with a firework display and more than 4,000 beacons are due to be lit in the UK and around the world. – BBC

Woods, at His Best, Matches One of the Greats