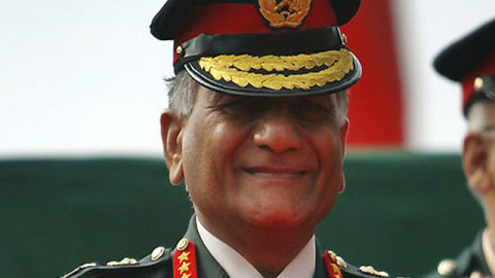 NEW DELHI: The head of the Indian Army retired yesterday after a stormy tenure in office that included a series of public spats with the government, amid speculation he may enter political life.

General Vijay Kumar Singh took the government to the Supreme Court in January in an unprecedented dispute over his retirement due to confusion over his date of birth. Singh lost his lawsuit, in which he sought to remain in his post an extra year, after the court upheld the government’s stance that his birthday in official records was May 10, 1950.Singh, who at 62 has reached the mandatory retirement age for his job, maintained he was born on the same day a year later and that a transcription mistake had been made in his records. The dispute caused discomfort in India, which prides itself on the armed forces deferring to civilian oversight.

“All I would like to say is that I want to be remembered as a soldier, as somebody who has tried to uphold what the army stands for,” Singh told a defense ceremony on Wednesday in the western city of Pune.“There is no misunderstanding between the ministry of defense and us.” Indian newspapers have regularly suggested that Singh has political ambitions but he has declined to outline his future plans.
“I don’t know at the moment, I will decide after retirement,” he was quoted as saying earlier this month when questioned by reporters.
Singh embarrassed the government in March by alleging that he was offered a $2.8 million bribe in 2010 to fix a supply contract, a complaint which was not followed up by the authorities.-arabnews