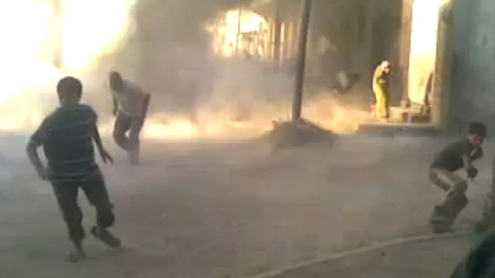 The United States and 10 other countries expelled Syrian diplomats Tuesday after blaming government forces for last week’s massacre of more than 100 villagers in central Syria, but they again stopped short of calling for more aggressive action to end the violence.

Despite expressions of outrage and agreement that the situation in Syria has reached what U.N. special envoy Kofi Annan called a “tipping point,” the Obama administration and its major allies said they would continue to rely on diplomatic, political and economic pressure against Syrian President Bashar al-Assad.U.N. monitors who visited the village of Houla, outside Homs, found that all but about 20 of 108 victims had been “summarily executed,” including “entire families . . . shot in their houses,” Rupert Colville, spokesman for the Office of the U.N. High Commissioner for Human Rights told reporters in Geneva. The rest, he said, were killed by artillery fire. Nearly half of the victims of Friday’s massacre were younger than 10. Annan, who traveled to Damascus, the Syrian capital, in a bid to salvage a six-point U.N. peace plan, said he had appealed to Assad for “bold steps — not tomorrow, now — to create momentum for implementation of the plan.” Annan called for an immediate end to violence by the Syrian military and government-backed militias and urged armed rebels to stop attacks.

Others used sharper language to assign blame for one of the worst atrocities since the anti-
Assad Syrian uprising began 14 months ago. “These were regime-sponsored thugs who went into villages, went into homes and killed children at point-blank range and their parents,” State Department spokeswoman Victoria Nuland said. She said the Syrian “thug force mirrors the same force that the Iranians used” to put down a nascent political uprising in 2009 and suggested that Assad was acting on Iran’s advice and assistance. Herve Ladsous, the U.N. undersecretary general in charge of peacekeeping, said the government was responsible for those killed by shelling. The rest, he said, were shot or stabbed in an assault that “probably points the way to the shabiha.” The term refers to pro-government militias belonging to Assad’s Alawite sect; Houla residents said the shabiha had gone house to house on a killing rampage in the Sunni village Friday night.

Opposed to tougher action As more details of the massacre emerged, 11 governments — including the United States and its major NATO allies — made coordinated announcements that they were expelling top Syrian diplomats. The Obama administration said it had given the Syrian charge d’affaires, Zuheir Jabbour, and several other senior diplomats 72 hours to leave the country, although the embassy in Washington would remain open with low-level staff. But despite the harsh denunciations — Nuland called the killings “absolutely indefensible, vile, despicable,” and French Foreign Minister Laurent Fabius described Assad as “the murderer of his people”— arguments against international military intervention “are still the same,” said a senior European diplomat. -washingtonpost