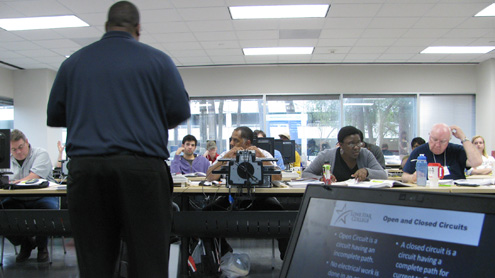 The United States and other large economies cannot find enough skilled workers, engineers and other in-demand employees, according to an annual study on talent shortages.

The study, by staffing services giant ManpowerGroup , found 34 percent of employers around the world report trouble filling jobs because of a lack of available talent. The percentage is unchanged from 2011 but up from the prior three years. However, most of the employers — 56 percent — say unfilled jobs are likely to have little or no impact on customers and investors. That is up from 36 percent who said so a year ago. Talent shortages persist despite high unemployment in many economies, especially among young people. Employers are more comfortable conducting business in an environment of talent shortages and remain reluctant to add workers while memories of recession are fresh, according to Manpower.

“Leaving positions unfilled may be a short-term fix, but it’s a short-sighted and unsustainable approach to addressing talent shortages,” Manpower Chief Executive Jeff Joerres said. The top reasons for not filling jobs include a lack of available applicants; too few hard skills, such as speaking a foreign language among those who do apply; and a lack of experience. Smaller numbers of employers complained about deficiencies in applicants’ soft skills, such as showing too little enthusiasm. Manpower polled 40,000 employers in 41 countries and territories. Skilled trade workers have topped the most in-demand list in four of the past five years. Educational systems around the world are emphasizing four-year university educations, while allowing vocational and technical programs to decline.

As fewer young people pursue technical educations and more older skilled workers retire, such shortages are likely to persist, the study predicts. Other in-demand jobs in 2012 are sales representatives, technicians, drivers, laborers and information technology staff. Accounting and finance workers, chefs and managers round out the top 10. Employers in Japan were the most likely to say they are having trouble finding staff, followed by those in Brazil, Bulgaria, Australia and the United States, where 49 percent report difficulty, down from 52 percent last year. While technical and business-oriented job categories top most countries’ lists, employers in the United States, Singapore and India, among others, say they cannot find enough teachers. Nurses are also in demand.

Several European countries, including Ireland, the Netherlands and Spain, ranked at the bottom of the list, with fewer than one in 10 employers struggling to find the right workers. Manpower also asked about responses to the talent shortage. The most frequent responses were employers offering more training to current staff, or broadening their search outside their local regions. Others put people into positions for which they are not fully qualified, hoping they’ll learn on the job. Higher pay, at least for now, is not a common response to the talent shortage. Only 8 percent of global employers are boosting starting salaries, and only 7 percent are offering better benefits or signing bonuses.-Yahoonews