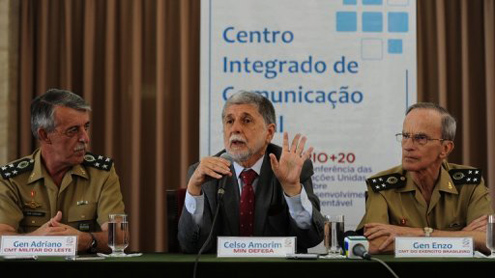 He said the army would deploy 8,000 troops who will be assisted by 7,000 police personnel. “We did very detailed planning, with a lot of people and equipment to ensure that the conference takes place in peaceful conditions,” Amorim told a press conference. Special units will be on standby to deal with any cyber or terror attacks, although the minister said there were no specific threats to the June 20-22 Rio+20 summit that will draw 115 world leaders and 50,000 participants. “In today’s world, cyber attacks are a dangerous threat. We have to be on our guard to guarantee the security of all the conference documents,” Amorim said. Security will be tightened at airports, ports and strategic installations such as gas and water plants while the air space over the Rio Centro convention center, the venue for the summit, will be closed.

The military said airports would operate normally, although priority would be given to the arrival and departure of official delegations. The security measures will also apply to the parallel “people’s summit” at the Flamengo park in southern Rio, which will be sponsored by civil society and is expected to see attendance of nearly 20,000 people a day. “We are prepared for any eventuality, but there is no reason to believe that something will happen,” said General Adriano Pereira Junior, head of eastern Brazil’s military command and the security coordinator for Rio+20. On June 5, Brazilian authorities are to turn the convention center over to the United Nations, but they will be responsible for security. Pereira said armored vehicles would be used solely to back troop logistics and movements, and he discounted any threat from the city’s main hilltop favelas, or slums.

Violence in key Rio favelas has been considerably reduced as security forces were deployed beginning in 2008 to wrest control from narcotraffickers who terrorized residents. “Rio de Janeiro is a city which lives in peace. We do not view the communities as a risk factor and there is no plan to use armor to protect the city,” Pereira said. The Brazilian intelligence agency Abin has described the risk of a terrorist attack as “low”. “But no matter how low, we have to be prepared,” said Pereira, who noted that an anti-terrorist unit of the army’s elite Special Operations brigade was sent from Brasilia to Rio to coordinate a task force for the event. “They include personnel from the army, the navy, military police, federal police — all those who have anti-terror training,” he added.  Pereira said Brazil did not need backing from foreign security services for this task, although he said there was some foreign support “in the area of intelligence” related to the security of foreign delegations. Rio+20, the fourth major summit on sustainable development since 1972, will seek to chart a course toward a “green” and social economy that can balance economic growth with poverty eradication and protection of the environment. -CNN