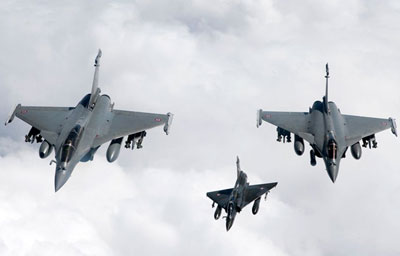 A NATO airstrike killed eight members of a family, including children, according to Afghan officials who claim that such attacks damage the civilian population’s trust in international troops who have been fighting in the country for more than a decade.

The U.S.-led coalition said it was aware of the allegation and was investigating the attack late Saturday in a remote part of Paktia province. The killings of civilians by foreign forces has been a major irritant in President Hamid Karzai’s relationship with his international partners. The Afghan leader warned earlier this month that civilian casualties could undermine a strategic partnership with the U.S. that is to govern long-term relations after most international troops withdraw by the end of 2014. NATO also reported Sunday that four coalition service members were killed in separate roadside bomb attacks Saturday in southern Afghanistan, bringing to 166 the number of NATO deaths so far this year.

The British Ministry of Defense said one of its soldiers was killed Saturday in an explosion in the Nahr-e Saraj region of southern Helmand province. The nationalities of the others killed were not released. Rohullah Samon, a spokesman for the provincial governor, said Mohammad Shafi, his wife and their six children died in an airstrike around 8 p.m. in Suri Khail village of Gurda Saria district. “Shafi was not a Taliban. He was not in any opposition group against the government. He was a villager,” Samon said. “Right now, we are working on this case to find out the ages of their children and how many of them are boys and girls.” Karzai said he has sent a delegation to the village to investigate the incident. NATO also said it was investigating.

“We acknowledge that coalition forces were conducting an operation in Paktia province against a large number of insurgents last night and we also are aware of the media reports today of civilian casualty allegations in that area,” Army Lt. Col. Jimmie Cummings, a coalition spokesman, said. Taliban attacks have killed more civilians than foreign forces, but public anger over the issue is usually directed at the international community. Tensions spiked after Afghan officials reported that 18 civilians had died recently in four airstrikes in Logar, Kapisa, Badghis and Helmand provinces. That led Karzai to issue his warning earlier this month. “If the lives of Afghan people are not safe, the signing of the strategic partnership has no meaning,” Karzai’s office said.

Last year was the deadliest on record for civilians in the Afghan war, with 3,021 killed as insurgents ratcheted up violence with suicide attacks and roadside bombs, the United Nations said in its latest report on civilian deaths. The U.N. attributed 77 percent of the deaths to insurgent attacks and 14 percent to actions by international and Afghan troops. Nine percent of cases were classified as having an unknown cause. Elsewhere, two civilians were killed Sunday when their vehicle struck a roadside bomb in Marjah district of Helmand province in the south, provincial spokesman Daud Ahmadi said.-khaleejtimes