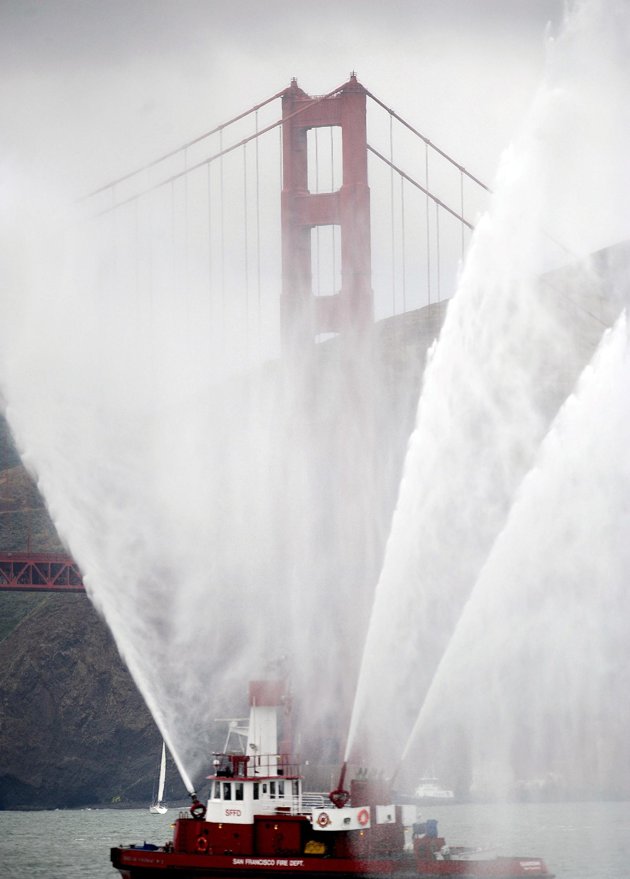 Thousands of people flocked to San Francisco’s waterfront and onto Golden Gate Bridge on Sunday to celebrate the famous span’s 75th birthday.

The daylong party attracted pleasure boats, tug boats and other vessels to the water as people on shore enjoyed a number of events stretching from Fort Point south of the bridge to Pier 39 along The Embarcadero. Many walked and biked across the bridge before capping the day by watching a fireworks display over the city’s most famous symbol. “It’s such an iconic structure, depending on the day or the hour, it just looks like it changes continuously,” San Francisco resident Daniel Sutphin said as he walked through the Fort Point area with his wife and their three young children. Since it opened in 1937, more than two-billion vehicles have crossed the 1.7-mile-long bridge named after the Golden Gate Strait, the entrance of water to San Francisco Bay from the Pacific Ocean, and championed by engineer Joseph Strauss in the 1920s.

In a stark contrast to the thousands of celebrants, members of the group the Bridge Rail Foundation, an organization dedicated to stopping suicide jumps from the bridge, erected a display of 1,558 pairs of shoes, representing the number of people who died in leaps form the bridge since it opened in 1937. “It’s a symbol of how deep and serious this problem has been,” said Paul Muller, a spokesman for the group. “We’re still losing 30 to 35 a people a year off the bridge,” he said. Meanwhile on the water, Golden Gate ferries were running again after a one-day strike disrupted service across San Francisco Bay on Saturday. Workers represented by the Inlandboatmen’s Union walked off the job on a day strike, forcing the cancellation of ferries operated by Golden Gate between Larkspur, Sausalito and San Francisco.

The strike was called after nearly a year of negotiations over workloads and other matters, said Marina Secchitano, the union’s regional director. California Gov. Jerry Brown issued a statement Saturday evening, saying that he was appointing a board to investigate the strike, which, he claimed, created a disruption to public service. Secchitano disputed the governor’s claim, questioning the motivation to call for an investigation after a one-day strike. “(This is) an action to try to silence us,” she said. “They’re counting on this process to back our membership off the issue,” she said. Service resumed Sunday when workers returned to work.-yahoonews