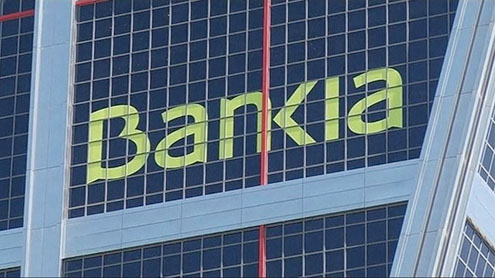 Spain’s fourth-largest bank, Bankia, has asked the government for a bailout worth 19bns euros ($24bn; £15bn).

Bankia also restated its results – now saying it made a 2.98bn-euro loss for 2011 rather than the 309m euros in profit it announced in February.Earlier on Friday, trading in Bankia shares was suspended on the Madrid stock exchange while its management put together a restructuring plan.Bankia has already been bailed out because of its bad property loans.After a meeting of the board on Friday, Bankia’s parent Banco Financiero y de Ahorro (BFA) asked Spain’s bank bailout fund, FROB, to inject the 19bn euros.

Bankia will then issue 12bn euros in capital that will be underwritten by BFA.The bank said that the “recapitalisation measures strengthen the group’s solvency, liquidity and stability”.Rating agency Standard and Poor’s has also lowered the credit rating of Bankia and four other Spanish banks.Two weeks ago, Bankia had a 4.47bn-euro loan by the Spanish bailout fund converted into a 45% stake in the bank.

Bankia had to reassure its savers last week that their money was safe after a Spanish newspaper reported a run on the bank.Bankia was created in 2010 from the merger of seven struggling regional savings banks. It holds 32bn euros in distressed property assets.Its shares fell 7.4% on Thursday to close at 1.57 euros, which is 58% down from their listing price in July 2011.There have been four attempts by Spanish governments to shore up the banking system since the global banking crisis of 2008.

As part of the latest plan, lenders are having to make 30bn euros of extra provisions to cover potential losses on property loans, which comes on top of 54bn euros they were ordered to set aside in February.The health of Spain’s banking system is key to whether the country eventually needs to seek a bailout itself from the eurozone and the International Monetary Fund.Spain’s credit rating was downgraded by S&P last month on the basis that it would probably have to take on more debt to support its banks.

Also on Friday, there were appeals for help from another Spanish institution – its wealthiest autonomous region, Catalonia.”We need to make payments at the end of the month,” said Catalan president Artur Mas. “Your economy can’t recover if you can’t pay your bills.”Catalonia represents one-fifth of the Spanish economy.It has to take out 13bn euros of loans this year to refinance maturing debt, not to mention funding whatever deficit it has for the current year.

The regions have been having trouble borrowing money commercially, so the central government has given them a special credit facility from the Official Credit Institute (ICO).Those credit lines run out in June and the government has said it will come up with a new mechanism to provide credit for the regions, but it is unclear what form the help should take. – BBC