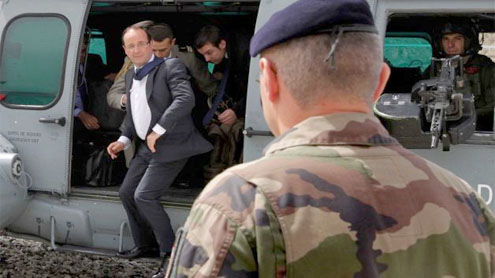 President Francois Hollande has defended his decision to end France’s military mission in Afghanistan a year earlier than planned.

Speaking in Kabul, he said some 2,000 French soldiers would be out by the end of 2012, leaving 1,300 other non-combat troops for an unspecified period.”The mission of fighting terrorism and chasing out the Taliban is close to being accomplished,” he said.France faces criticism for pulling out before Nato’s planned 2014 withdrawal.Mr Hollande, who took office earlier this month, flew into Kabul and held talks with Afghan President Hamid Karzai before a joint news conference.

He was also due to spend time with French soldiers during his short visit. He was said to want to “explain himself” to French soldiers, and make the reasons for the decision clear to them.Under Mr Hollande’s election pledge, French combat troops will go home a year earlier than the deadline set by former president Nicolas Sarkozy.Mr Hollande has described the early withdrawal as a “sovereign decision” and said that it would be “conducted in good understanding with our allies, especially President Obama – who understands the reasons – and in close consultation with Afghan authorities”.

France is currently the fifth largest contributor to the Nato force in Afghanistan, with nearly 3,300 French soldiers stationed there.Eighty-three have been killed during the deployment, which began in 2001.Those French soldiers remaining in Afghanistan after combat troops leave will oversee the repatriation of equipment and help train Afghan security forces.But Mr Hollande said French involvement in Afghanistan would continue – with a greater emphasis on civil and economic co-operation – including in areas like culture and archaeology. – BBC