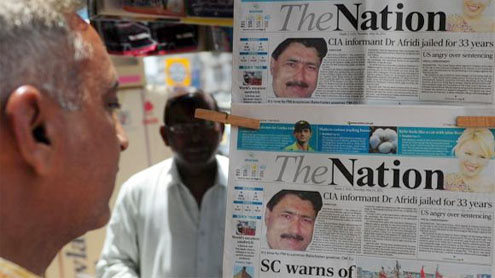 WASHINGTON: A Senate panel voted to cut aid to Pakistan by a symbolic $33 million, $1 million for each year of jail time handed to a Pakistani doctor convicted of treason for helping the United States track down Osama Bin Laden.

The Senate Appropriations Committee approved the amendment to the $52 billion US foreign aid budget in a 30 to zero vote in a sign of growing outrage here over Pakistan’s conviction of Shakeel Afridi.Afridi was found guilty of treason, sentenced Wednesday to 33 years in prison and fined 320,000 rupees ($3,500) under an archaic tribal justice system that has governed Pakistan’s semi-autonomous tribal belt since British rule.

His sentencing was announced two days after US President Barack Obama appeared to snub Pakistani President Asif Ali Zardari at a NATO summit in Chicago over Islamabad’s refusal to lift a six-month blockade on transit routes into Afghanistan.Afridi ran a fake vaccination program designed to collect Bin Laden family DNA from the compound in the garrison town of Abbottabad, near Islamabad, where the Al-Qaeda leader was shot dead in a US commando raid in May 2011.

The US government says Pakistan has no basis to hold Afridi, whom an official at Peshawar central jail said was in poor health and being kept away from other prisoners to avoid any danger to his life.“He is not a spy I can tell you,” said Dianne Feinstein, the Democratic chairwoman of the Senate Intelligence Committee. “He should be praised and rewarded.” “If this is how Pakistan is going to treat a friend and hero. I don’t know about these funds,” Feinstein said.

The mammoth appropriations bill, which includes a total of $1 billion in assistance for Pakistan, will go now to the Senate floor after passing out of committee on Thursday.It also includes a provision calling for a 58 percent cut in aid for Pakistan if Islamabad does not reopen supply routes frozen since US air strikes that killed 24 Pakistani soldiers in November.The United States has given Pakistan more than $18 billion in assistance since the September 11, 2001 attacks, but US officials have persistent concerns that some elements of the establishment have maintained support for extremists.

The United States has given Pakistan more than $18 billion in assistance since the September 11, 2001 attacks, but US officials have persistent concerns that some elements of the establishment have maintained support for extremists.Pakistan was tight lipped about the cuts.“We respect their legislative process but obviously the case of Doctor Shakeel Afridi will be decided in accordance with Pakistani laws and by the Pakistan courts,” foreign ministry spokesman Moazzam Ahmad Khan said. – Arabnews