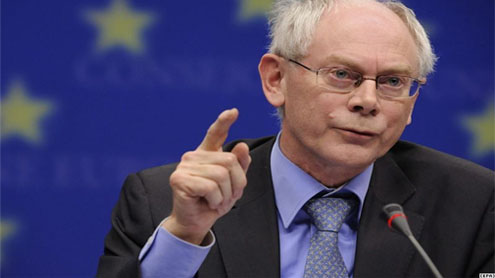 A top EU official is launching a plan to rescue the eurozone by binding its 17 nations closer together.

There is a widely held view that the EU single currency needs a fiscal union in order to function smoothly.The “building blocks” for strengthening economic union will be drafted by the European Council President, Herman Van Rompuy, with input from the European Commission and European Central Bank.Mr Van Rompuy announced the initiative after an EU leaders’ dinner.

“There was general consensus that we need to strengthen the economic union to make it commensurate with the monetary union,” he told a news conference in Brussels on Wednesday night.His report before the summit on 28-29 June would outline “the main building blocks” and “a working method to achieve this objective”, he said.Eurobonds, more integrated banking supervision and a common deposit insurance scheme would be among elements to consider, he added.

The meeting came amid heightened anxiety about Greece, whose massive credit lifeline from the EU and IMF could dry up if it reneges on tough pledges to rein in spending.Greece’s leftist political bloc Syriza, opposed to the bailout, may win the country’s election on 17 June.Mr Van Rompuy was the chief architect of the EU’s fiscal compact, adopted in December as an inter-governmental agreement rather than a treaty change, after UK Prime Minister David Cameron objected to it.Further binding measures to integrate the eurozone could be adopted similarly, without the signatures of all 27 EU governments.

Efforts to stabilise the eurozone and inject much-needed economic growth have been bedevilled by the high borrowing costs of countries such as Greece, Spain and Italy, compared with Germany.This week Germany has sold sovereign bonds at near 0% interest, or “yield”, while Spain’s yield has risen above 6%. A rate of 7% is considered unsustainable.The Spanish national and regional governments, and its banks, are suffering from a severe shortage of liquidity. Yet the EU may not have the funds, or the support of taxpayers, to step in with a huge cash injection.

Eurobonds – a tool for the whole eurozone to guarantee the bonds of weaker members and ease their crippling debts – are now at the heart of the debate about fiscal union.Mr Van Rompuy said eurobonds could only be part of a long-term solution.But France’s new socialist President Francois Hollande and Italy’s Prime Minister Mario Monti are among several EU leaders who favour an early launch of eurobonds to revive growth and restore market confidence.

Mr Hollande said that “for now, Germany’s line of thinking is that eurobonds, if I give the most optimistic version, could only be an end point, whereas for us they are a starting point”.”It’s true that there is a difference,” he added.German Chancellor Angela Merkel said the bonds would violate EU treaties and would “not contribute to kick-starting growth”.She said that for eurobonds to work there would first have to be “very much stronger economic coordination in the eurozone”. – BBC