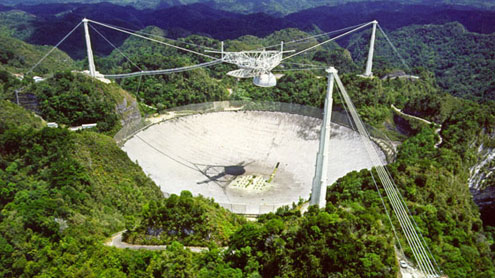 The nations belonging to the Square Kilometre Array (SKA) organisation took the decision at a meeting on Friday.The 1.5bn-euro (£1.2bn) SKA’s huge fields of antennas will sweep the sky for answers to the major outstanding questions in astronomy.They will probe the early Universe, test Einstein’s theory of gravity and even search for alien intelligent life.The project aims to produce a radio telescope with a collecting area of one million square metres – equivalent to about 200 football pitches.

To do this, it will have to combine the signals received by thousands of small antennas spread over thousands of kilometres.South Africa and Australasia had put forward separate, competing bids, and the early indications had been that there would be one outright winner.But the SKA organisation decided both proposals should contribute something to the final design of the telescope.”We have decided on a dual site approach,” said SKA board chairman John Womersley.He was speaking at a press conference held at Amsterdam’s Schiphol Airport following a meeting of the organisation’s members in the Dutch capital.

The SKA’s targets will be radio sources in the sky that radiate at centimetre to metre wavelengths.These include the clouds of hydrogen gas in the infant Universe that collapsed to form the very first stars and galaxies.The SKA will map precisely the positions of the nearest billion galaxies. The structure they trace on the cosmos should reveal new details about “dark energy”, the mysterious negative pressure that appears to be pushing the Universe apart at an ever increasing speed.

The telescope will also detail the influence of magnetic fields on the development of stars and galaxies. And it will zoom in on pulsars, the dead stars that emit beams of radio waves that sweep across the Earth like super-accurate time signals.Astronomers believe these super-dense objects may hold the key to a more complete theory of gravity than that proposed by Einstein.The Australasian bid was centred on a site at Boolardy Station, about 500km (310 miles) north of Perth in Western Australia. For South Africa, the central location put forward was in the Karoo in the Northern Cape, about 95km from Carnarvon.

Both have exceptional conditions for radio astronomy in that, being remote territories, they experience very little stray interference from celluar phone networks and TV broadcasts.Both Australia and South Africa had even started building precursor facilities which they hoped would enhance their bids’ attractiveness.The SKA’s designers will now have to work out how these smaller radio telescope systems can be incorporated into the final network.The SKA’s members include the UK, Netherlands, Italy, China, Canada, Australia, New Zealand and South Africa. India has associate member status.

There will be major industrial return for all members. The next project engineering phase is worth about 90m euros. Phase 1 of the project, due to start in 2015/16, was valued at around 360m euros. The cost of the last phase was always uncertain and depended on knowing exactly where the SKA would be built and the final design it would take; but a sum of 1.2bn euros was considered a likely figure.The decision to dual-site will undoubtedly increase the cost and complexity of the SKA. – BBC