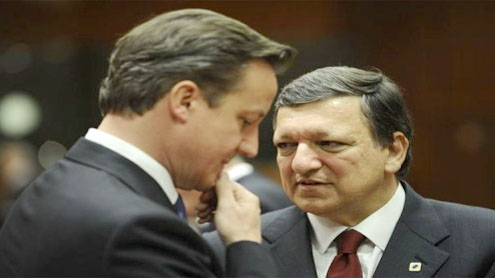 Britain may be on the outside looking in as the eurozone wrestles over its future at a summit on Wednesday, but its calls for action reflect global worries about the knock-on effects of the crisis.

As leader of the biggest economy among the 10 EU nations that do not use the single currency, Prime Minister David Cameron has been able to tread where countries like France or Germany have feared to.Cameron arrived for an informal dinner of all 27 EU leaders calling for a “decisive” plan for debt-hit Greece and for the longer-term future of the eurozone, which is Britain’s biggest trading partner.”What we need is a decisive plan for Greece, and we need decisive plans to help get the European economies moving,” Cameron told reporters.

“But if we’re not going to keep coming back and back to meetings like this we also need to deal with some of the longer term issues at the heart of running a successful single currency: having a bank that gets behind that single currency, having coherent long-term plans to make sure that single currency is coherent.”He went further before leaving London for Brussels, telling parliament on Wednesday that Greece’s general election re-run in June should be made into a virtual referendum of its membership of the euro.”I don’t believe we can afford to allow this issue to be endlessly fudged or put off,” said Cameron.

“The Greek election should in effect be a straightforward choice between staying in the eurozone with the responsibilities that entails, or taking a different path.”Historically, Cameron’s comments follow a long trend of Europe and Britain looking askance at each other, from French leader Charles de Gaulle’s refusal to let Britain join what was then the Common Market to Britain’s refusal to join the euro when it launched in 2002.Cameron has irritated his EU peers in recent months, particularly when Britain refused to sign a fiscal pact because it called for a financial services tax that he said would have hurt the City of London.

But British officials say Cameron’s comments on Wednesday reflected his frustration after attending two years of EU summits with no end in sight to the crisis in the eurozone, which is Britain’s biggest trading partner.And despite a broad “eurosceptic” streak in his Conservative party and indeed in himself, Cameron has repeatedly pointed out that Britain cannot stand by and do nothing as a eurozone collapse would have wide-ranging effects.As such he is a voice at the table for the United States, Japan and many other parts of the world frustrated with the eurozone’s failure to deal with a potential meltdown.

Cameron said recently that Britain was six times more exposed to eurozone debt than the United States, in what was also a reminder of how widely the tentacles of the eurozone crisis have spread.But Britain’s efforts to forge a wider group outside the euro have foundered.In March it led a group of 11 countries that signed a letter calling on the eurozone to boost growth, but some of the other non-euro states are still hoping to join the single currency and do not want to be part of British-led euro-bashing.London has also found itself following rather than leading as the mood veered away from austerity in Europe in recent weeks after elections in France and Greece. – Yahoonews