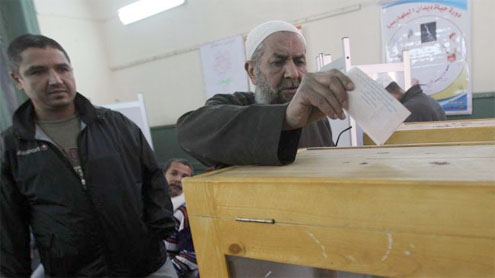 Egyptians are voting in their first free presidential election, 15 months after ousting Hosni Mubarak in the Arab Spring uprising.

Fifty million people are eligible to vote, and large queues have formed at some polling stations.The military council which assumed presidential power in February 2011 has promised a fair vote and civilian rule.The election pits Islamists against secularists, and revolutionaries against Mubarak-era ministers.But the BBC’s Wyre Davies, in the second city of Alexandria, says that for many people the election is not about religious dogma or party politics, but about who can put food on the table.

Ahmed Shafiq, a former commander of the air force and briefly prime minister during                February 2011 protests

Amr Moussa, who has served as foreign minister and head of the Arab League

Until a new constitution is approved it is unclear what powers the president will have, prompting fears of friction with a military which seems determined to retain its powerful position.Voting began at 08:00 local time (06:00 GMT), with queues observed at many Cairo polling stations.BBC correspondents say the atmosphere is calm, with people waiting patiently for their turn.There have been no reports of violence on the day, although a police sergeant died after being shot during clashes between rival supporters in Rawdh al-Faraj on Tuesday evening, officials said.

“It’s a very big day,” one woman told the BBC. “This is a real great moment for the Egyptians to change.”Another, when asked how long she had been waiting to vote, replied, with a laugh: “Thirty years.”One man said it was most important for the new president to have his own programme.”Actually he has to be in the revolution, or he has to be a strong part in the revolution. This is something which is not negotiable,” he said.

Mr Mursi was originally the Muslim Brotherhood’s reserve candidate, but he was thrust into the limelight after its first choice, Khairat al-Shater, was disqualified by the Higher Presidential Electoral Commission (HPEC) over an unresolved conviction.The Brotherhood has nevertheless likened Mr Mursi, US-educated engineer and MP, to an underrated football substitute. “In any match there is the reserve who plays in the last 10 minutes, scores the goal and wins the match. Mursi is our reserve player,” said cleric Mohamed Abdel Maqsoud while addressing a crowd of Brotherhood supporters on Sunday.

A run-off vote is scheduled for 16 and 17 June if there is no outright winner.The election is being hailed as a landmark for Egyptians, who have the opportunity to choose their leader for the first time in the country’s 5,000-year recorded history.The Supreme Council of the Armed Forces (Scaf), worried about potential post-election unrest, has sought to reassure Egyptians that it will be the voters themselves who decide who will be the next president.

“It is important that we all accept the election results, which will reflect the free choice of the Egyptian people, bearing in mind that Egypt’s democratic process is taking its first step and we all must contribute to its success,” it said in a statement on Monday.The 15 months since Mr Mubarak was forced from power has been turbulent, with continued violent protests and a deteriorating economy.Foreign direct investment has reversed from $6.4bn (£4bn) flowing into the country in 2010 to $500m leaving it last year.Tourism, a major revenue generator for the country, has also dropped by a third.

The new president will also have to reform the police to deal with the rash of crime that followed the uprising.As many as a third of voters are reported to be undecided about which candidate to choose.The Arab Spring began in Tunisia last year when weeks of protests forced President Zine al-Abidine Ben Ali from power, inspiring pro-democracy activists across the Arab world.Mr Mubarak, who was in power for three decades, resigned on 11 February 2011 after 18 days of protests in Cairo and other cities.He is on trial for his alleged role in the deaths of protesters, and a verdict in the case is due on 2 June. – BBC