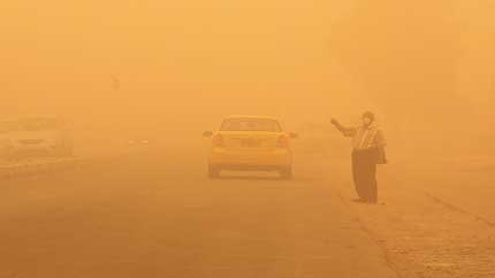 BAGHDAD: A dust storm shut Baghdad airport on Tuesday, an Iraqi Airways official said, a day ahead of key talks between world powers and Iran on the Islamic republic’s controversial nuclear programme.

“There are no take-offs or landings because of bad weather,” the official told AFP on condition of anonymity. The closure began at about 8:00 am (0500 GMT), the official said, adding that four departing flights had been delayed so far. It was unclear when the airport would reopen, or if attendance of the nuclear talks would be impacted by the closure. Iran’s chief negotiator Saeed Jalili arrived in Baghdad Monday. The talks, set for Wednesday, are to be held between Iran and the five permanent members of the UN Security Council — Britain, China, France, Russia and the United States plus Germany. – Dailytimes

Millions turn out to watch rare 'ring of fire' spectacle