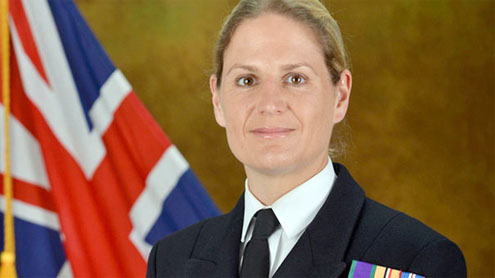 Britain’s first female commander of a major warship took up her post on Tuesday, taking control of HMS Portland.

Commander Sarah West, 40, took over the Type 23 frigate, which is undergoing a refit at Rosyth, northwest of Edinburgh.“Taking command of HMS Portland is definitely the highlight of my 16 years in the Royal Navy so far,” she said.“It is a challenge that I am fully trained for and ready to undertake.“I am very proud to be taking command of a Type 23 frigate, which is an extremely flexible warship, and I’m looking forward to taking HMS Portland on operations with a professional and focused team.”

The warship will undergo a series of trials once the refit is complete, then return to its base in Devonport, southwest England, before the end of the year. It will then be prepared for its next mission.Women first went to sea with the Royal Navy in 1990 and some smaller ships have been under female command since then.The Ministry of Defence said that in addition to West, it expects that three minor war vessels will be commanded by women by the end of the year. — Khaleejnews