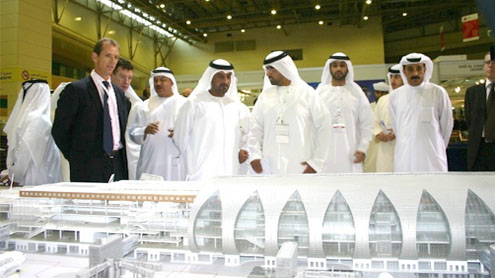 DUBAI: With their eyes set on tapping the huge business prospects offered by the multi-million dollar expansions of airports in the Middle East region in general and GCC states in particular, the world’s leading aviation companies have made a significant presence at the 12th edition of the Airport Show which was opened on Tuesday Shaikh Ahmed bin Saeed Al Maktoum, President of Dubai Civil Aviation Authority (DCAA) and Chairman of Dubai Airports.

Accompanied by a large number of dignitaries and top-ranking officials, including the chief executives of regional airports, civil aviation authorities and aviation companies, Shaikh Ahmed, who is also the Chairman and Chief Executive of Emirates Airline and Group, opened the show and toured the three-day annual B2B event hosted over an exhibition space of 10,302 square metres in Sheikh Saeed Hall (1, 2 and 3) of the Dubai International Convention and Exhibition Centre (DICEC).

Billed as the world’s most dynamic airport show, Dubai’s iconic aviation industry event is featuring a wide line up of innovative technology products and services from 210 companies from 32 countries, including China, Denmark, France, Germany, Swiss and the UK which have set up dedicated pavilions. More than 5000 visitors from the aviation and other economic sectors are expected to attend the show over the three-day period.

Mohammed Ahli, Director General of Dubai Civil Aviation Authority (DCAA), formally opened the Seminars programme of the Airport Show and highlighted the importance of updating knowledge and skills for the aviation industry professionals in order to achieve excellence in every sphere of operations. A total of 25 presentations on new projects and initiatives along with latest innovation and technology will be conducted during the Airport Show-2012. On the opening day, six seminars were conducted, covering topics like The World’s First Mobile Passenger Terminal, Integrated Airport Systems, King Hussein International Airport, Multi-Purpose Airport Sweeper and Cavotec E3 Gate.

The biggest event in the MENA region and Indian subcontinent features many of the leading local and international companies in the airport industry like Kronenburg BV, Dar Al Handasah, Airbus Prosky, Al Jaber L.E.G.T Engineering and Contracting (ALEC), Honeywell, Siemens, ADPI and Munich Airport. This year’s edition is seeing Germany having the largest pavilion in terms of size and number of participating companies in the past three years.

This year’s Hosted Buyers Programme is seeing the participation of as many as 43 key airport and civil aviation decision-makers from 13 countries in the Middle East and South Asia. The Hosted Buyers are from Saudi Arabia, Kuwait, Bahrain, Turkey, Djibouti, Iraq, Iran, Pakistan, Tunisia, Egypt, Algeria and Jordan in addition to the hosting country, UAE.

For the first time, the show organisers introduced a Project Village which gathers all hosted buyers stands at a prime location at the exhibition venue. Hosted Buyers will have the opportunity to present their projects at the Project Seminar giving attendees valuable insights into the regions industry outlook.

Mohamad Bader-Eddin, Show Director at Reed Exhibitions Middle East, organizer of the Airport Show, said: “We have successfully put together a great show this year. We would like to thank both the government and private sectors for their invaluable support and cooperation in making it a successful event. The aviation industry in general and airports sector in particular is showing signs of strong growth in this region and how the aviation industry players from near and far are out to tap the business opportunities.”

He added: “With billions of dollars planned to be pumped into the capacity expansion of airports in the GCC region, the Airport Show provides the global aviation industry players the opportunity to enhance their businesses by tapping into the unlimited growth potential of markets like the UAE, Qatar, Saudi Arabia and Kuwait. The GCC region holds immense hope to the global aviation industry with its airports expansion programme and the Airport Show has proved once again that it is the ideal platform to bring the buyers and sellers under one roof.”

Millions of dollar worth of deals are expected to be initiated from the show considering the focus of the global aviation industry on the Middle East region in general and the GCC states in particular due to the massive investments planned by the government to turn their airports into global transport hubs to meet the ever-growing passenger and cargo traffic demands.A report by Frost & Sullivan said US$86 billion will be spent by Middle East airports in expansion plans until 2025. The UAE have announced billions of dollars investments in airport expansion and improvement programmes.

Dubai Airports announced that its Strategy Plan 2020 includes investments worth over AED28.4 billion to implement the fourth phase of Dubai Airport expansion and increase the airport’s capacity to over 90 million passengers annually to meet the future growth needs.Abu Dhabi Airports Company (ADAC) announced investments to the tune of AED24.8 billion to improve the Abu Dhabi airport and the capacity to 40 million passengers a year. The completion of the project is expected to be in 2015-2016. Similarly, Sharjah intends to spend AED500 million and Fujairah AED160 million in airport facilities and expansions.

In the GCC region, Saudi Arabia signed a deal to invest approximately AED27 billion on the new airport project. In Oman, the Muscat and Salalah airports are being developed at a total cost of AED1.2 billion to handle 48 to 10 million passengers per year, respectively. Facing increase in cargo and passenger movements, Kuwait has put in a total of AED172 million in airport expansion programme, while Qatar is aiming to boost to its aerospace sector at a cost of AED4 billion. – Khaleejnews