Military to take charge of air space for Olympics 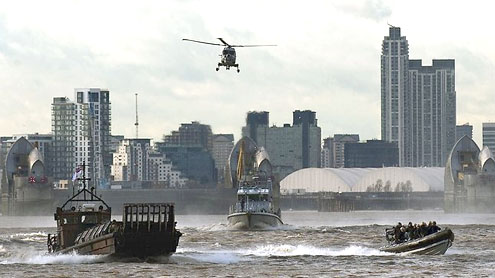 Military is to take charge of London’s airspace for the first time since 1945 as part of the huge security operation set up to police the Olympic Games, according to The Times.

Civilian controllers will still be responsible for guiding the 500,000 extra guests into the capital’s airports, but will be under the overall supervision of the Ministry of Defence (MoD) for the first time since World War II. The MoD is expected to create a zone of secure airspace which is restricted by the military, and will work out of a military-civilian control centre in Hampshire, south England, according to the report, published on Tuesday.

“It’s their operation, with their controllers and their procedures,” Paul Haskins of the National Air Traffic Services (Nats) told the newspaper. “Nats is providing them the equipment in order for them to operate the facility,” he added.  The MoD is expected to create a zone of secure airspace which is restricted by the military, according to the report. Police on Monday confirmed some 12,500 officers would be deployed daily during the Olympic Games in the country’s largest ever pre-planned policing operation.

A 40,000 strong security force is to guard the Games — which start on July 27 — at a cost of £553 million. The MoD and armed forces will provide around 13,500 personnel, who will work alongside police and more than 16,000 private security guards and unpaid volunteers. Security chiefs are believed to be preparing for a range of threats including a “lone wolf” terrorist, riots or cyber-attacks. -Yahoonews