Fired for being “too hot,” New Jersey woman claims 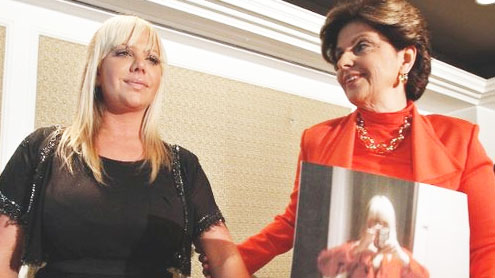 Fired for being "too hot," New Jersey woman claims

A New Jersey woman said on Monday that she was dismissed from a temporary job at a New York lingerie warehouse because her male employers felt she was too busty and dressed too provocatively for the workplace.

Wearing a form-fitting sequined black dress and black leather, sequin-studded boots, Lauren Odes, 29, said her Orthodox Jewish employers at Native Intimates told her that outfit and others like it were “too hot” for the warehouse. “We should not be judged by the size of our breasts or the shape of our body,” Odes said.

Odes’s attorney, celebrity lawyer Gloria Allred, said she filed a gender and religious discrimination complaint with the U.S. Equal Employment Opportunity Commission in New York. Odes said she felt her wardrobe was appropriate for a business that sells “thongs with hearts placed in the female genital area and boy shorts for women that say ‘hot’ in the buttocks area.”Media photographers climbed on chairs and crashed into each other as Odes held a pose and Allred held up a series of purple, black and brown outfits she said also led to the woman’s dismissal.

Odes said that on successive days during her week-long employment in late April she was warned that her attire was too alluring, that her breasts should be taped down to make them look smaller, and that she was asked to wear a red bathrobe to cover one outfit. “This whole experience has been horrifying to me,” she told reporters. “I love fashion and I always will, but I don’t believe any woman should be treated as I was.” Odes, whose said her duties included data entry and coordinating the shipping of samples to customers, said she eventually agreed to purchase a sweater to wear over her dress, but was dismissed anyway.

“I understand that there are Orthodox Jewish men who may have their views about how a woman should dress … but I do not feel that any employer has the right to impose their religious beliefs on me,” she said. An employee at the company had no immediate comment on Odes’ claims.   -Yahoonews