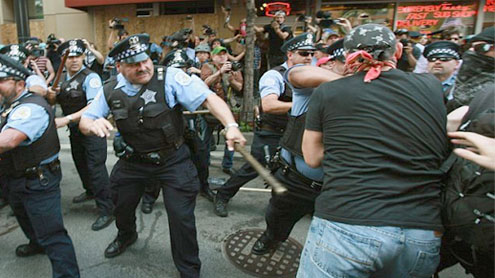 Several thousand demonstrators marched through downtown Chicago to protest the start of the two-day NATO summit as planned, streaming into Chicago’s Grant park on Sunday afternoon.

And unlike Saturday–which featured “increasingly tense clashes” between police and protesters–Sunday’s march was mostly peaceful.Mostly. But there were some isolated, violent clashes between police and protesters–resulting in at least 45 arrests and four police officers hurt.One clash, according to the Associated Press, began when “dozens of protesters in black clothing surged toward a much smaller group of police, throwing objects at them.

The “badly outnumbered officers fought back with truncheons, and people on both sides threw punches. As police reinforcements moved in, the pack of violent protesters fled,” the AP said.Another occurred late Sunday afternoon, when protesters who had marched two-and-a-half miles from Grant Park to the NATO site pushed against a line of police officers in riot gear. A CNN video showed the officers beating several protesters with batons.”They charged the cops and they assaulted the officers,” Chicago Police superintendent Garry McCarthy said, according to CNN. “The finger should be pointed at the people who assaulted the cops.”

Earlier on Sunday, two men–24-year-old Sebastian Senakiewicz and 28-year-old Mark Neiweem–were taken into custody accused of planning to use Molotov cocktails during the summit, according to CNN. Their arrests came a day after three activists were accused of a plot to attack the Obama campaign’s Chicago headquarters using the firebombs.Senakiewicz was charged with falsely making a terrorist threat; Neiweem was charged with attempted possession of explosives or incendiary devices. Bond was set at $750,000 and $500,000, respectively.

Sunday’s arrests “arose from similar investigations” but were otherwise related to Saturday’s arrests, prosecutors said.Organizers of the protests had initially expected more than 10,000 demonstrators, but that was before the preceding G-8 summit–which had also been scheduled for Chicago–was moved to Camp David in Maryland.Like the Occupy Wall Street movement, which helped organize Sunday’s rally, the demonstrators protesting NATO in Chicago were criticized for lack of a clear message. – Yahoonews