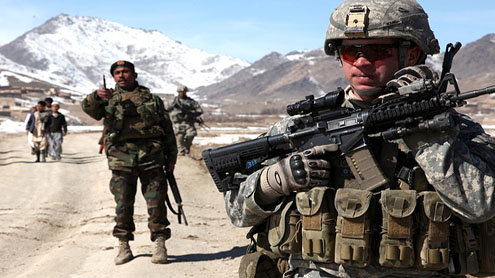 The commander of NATO-led forces in Afghanistan bluntly warned Sunday that American soldiers will face combat in that war-torn country right up to the time they leave, December 31, 2014.

General John Allen told reporters not to buy into a “narrative” that the handover of security responsibilities to Afghan forces next year means US troops will be out of harm’s way.”Combat operations will continue in the country throughout the period of the remainder of the ISAF mission, which will conclude on the 31st of December, 2014,” Allen, who leads NATO’s International Security Assistance Force (ISAF), said at a briefing on the sidelines of the NATO summit in Chicago.

The diplomatic gathering aims to flesh out the alliance’s plan to train and equip Afghan national security forces (ANSF) and given them the lead on combat efforts by mid-way through 2013. But that doesn’t mean Americans won’t be in the line of fire.”I don’t want to, again, understate the challenge that we have ahead of us. the Taliban is still a resilient and capable opponent in the battle space,” Allen said. “There’s no end of combat before the end of 2014. And in fact the Taliban will oppose the ANSF after 2014.”The United States is on track to reduce its presence to 68,000 troops by late September. More than 3,000 Americans have been killed in the decade-long conflict launched to catch or kill Osama bin Laden, whom Navy SEALS shot dead in a dramatic May 2011 raid inside Pakistan.

While Afghans will take the lead gradually, “it doesn’t mean that we won’t be fighting, it doesn’t mean there won’t be combat. And that’s important because there is a narrative out there that combat operations for the US stops at milestone 2013. That is not, in fact, correct,” the general said.And Allen suggested that international forces could return to areas they have turned over to Afghan troops if the Taliban seem to be getting the upper hand.”We have short-term capabilities to shift forces. We’re going to watch very closely the Taliban. The Taliban have been unambiguous in that they intend to take advantage of the removal of the surge forces. And so we have planned for that,” he said. “If we detect that there is in fact a Taliban presence beginning to surge in behind our forces we have forces that are available that we intend to put against htat to prevent that from happening.”

Allen played down the potential impact of newly elected French President François Hollande’s decision to pull French 3,400 combat forces out by year’s end, one year earlier than his predecessor had planned. Hollande has hinted at a possible French role for training Afghan forces but has not yet fully fleshed out his plan.”Ultimately, we will need to understand exactly what the French decision will mean,” Allen said. “We have the capacity, using our current force structure, to ensure that there is no degradation in security with respect to any decisions that might be made.”

“At this juncture we will seek to provide France opportunities should they desire to continue to contribute to the ISAF mission,” the general said. “But those are sovereign French decisions, and we’ll support those decisions. But we’re also prepared to provide options, viable options, for contributions to the ISAF mission over time.””And many of those contributions often take the form and the shape of training, mentoring, instructing — and all of those are important to the mission overall,” Allen said.The general also played down the impact of Pakistan’s decision to close ground supply lines for NATO forces last November in the aftermath of a NATO strike on Pakistani territory that killed 24 Pakistani soldiers.

“It has not in fact negatively affected my — our — prosecution of the campaign,” he said. And Allen cited “some very positive indications of late” in negotiations with Pakistan that they will reopen those supply lines.Asked about reports of tension between the White House and the Pentagon over the troop withdrawal plan, Allen replied: “There is no daylight between the commander on the ground in Afghanistan and the commander in chief.””I think we’re in an excellent strategic conversation right now about the way ahead. I’m frequently asked for my opinion and my views and I am grateful to be engaged in that kind of a strategic conversation,” he said. “I was asked whether I could execute that plan and I told them that I can, and I’m executing the plan.” – Yahoonews