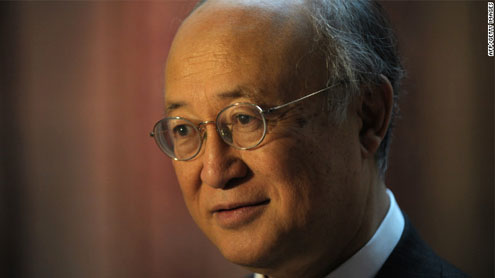 The head of the United Nations nuclear watchdog agency plans to fly to Iran on Sunday to discuss nuclear issues with high-level officials in Tehran.

The visit by Yukiya Amano, the director-general of the International Atomic Energy Agency, raises speculation that Iran may be willing to grant inspectors access to sites for its investigation into whether Iran is developing weapons.The Iranians met with the agency for the first time in three months in Vienna, Austria, this week and are expected to meet again Monday.

Two days later, Iran is scheduled to discuss its nuclear program with world powers known as the P5+1: the United States, France, Russia, China, Britain and Germany. That meeting, scheduled some time ago, will take place in Baghdad.Israeli Prime Minister Benjamin Netanyahu, however, said Friday that Iran would not take nuclear talks seriously.”I have seen no evidence that Iran is serious about stopping its nuclear weapons program,” he said during a trip to the Czech Republic. “It looks as though they see these talks as another opportunity to deceive and delay just like North Korea did for years.”

An Iranian lawmaker said Israel was attempting to convince the world powers to increase pressures on Iran in an effort to mar the upcoming talks.”If the Western world wants these talks to have positive results, it should not be deceived by the Zionists,” Javad Jahangirzadeh said, according to the semi-official Fars News Agency.The aim of the current meetings with the atomic agency is to “devise a framework for answering questions about Tehran’s nuclear energy program,” according to Ali Asghar Soltanieh, Iran’s ambassador to the agency, quoted on state-run Press TV.

In March, the agency noted what it called a sharp and troubling increase in Iran’s uranium enrichment capabilities.The United States and its allies suspect that Iran is evading international inspections and is developing nuclear weapons. As punishment, Western nations have slapped crippling sanctions on Iran.Iran denies the allegations and insists that its nuclear program is intended solely for civilian energy purposes. – CNN