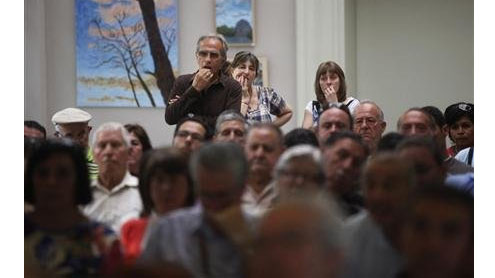 MADRID: Spain’s borrowing costs shot up at a bond auction on Thursday and its troubled banks suffered a double blow, with shares in part-nationalized Bankia diving and 16 lenders – including the euro zone’s biggest – having their credit ratings cut.

Official data confirmed Spain was back in recession and a newspaper reported a big outflow of deposits from Bankia, but the government said it had taken a fundamental step to strengthen Spain’s credibility by agreeing big budget cuts with the country’s free-spending regions.Moody’s Investors Service cut the long-term debt and deposit ratings of the 16 Spanish banks, including Banco Santander, the euro zone’s largest, saying the government’s ability to support some banks had weakened.

Spain’s banks, saddled with bad loans after a property boom collapsed, lie at the heart of the euro zone crisis as markets fear any major rescue would strain Madrid’s already stretched finances and possibly require an international bailout.Gary Jenkins, credit analyst at Swordfish Research, said Spain had problems which went beyond the risk of contagion from the crisis in Greece, whose future in the euro is in doubt

“Whilst the attention of the world is on Greece, the fact is that Spain faces many challenges irrespective of how the Greek situation is finally resolved,” he wrote in a note.Moody’s cut the rating of BBVA, Spain’s second largest lender, as well as Santander even though both are generally regarded as sound, unlike some of their smaller peers.Nicholas Spiro of Spiro Sovereign Strategy said the government of Prime Minister Mariano Rajoy was not handling the crisis well. “Sentiment towards Spain is deteriorating with each passing day, mainly because of a loss of confidence in the Rajoy government’s approach to tackling the problems in the banking sector,” he said.

At Thursday’s debt auction, the Treasury had to pay around 5 percent to attract buyers of three- and four-year bonds. The latter sold with a yield of 5.106 percent, way above the 3.374 percent the last time it was auctioned.”This … fits the pattern of recent sales, with the Spanish treasury successfully getting its supply away but at ever-higher yields,” said Richard McGuire, rate strategist at Rabobank in London. “This unfavorable trend looks set to remain firmly in place … Ultimately, this ratcheting up of yields will likely require some form of outside intervention.”

Spain officially slipped into recession in the first quarter this year, final figures confirmed on Thursday, leaving the country threatened with a prolonged slump as the turbulent euro zone struggles to balance austerity with growth.The European Commission warned last week that high debts of the 17 regions, which account for about half of overall public spending, and the welfare system would prevent Spain meeting its goal of cutting the budget deficit to 5.3 percent of gross domestic product this year from 8.5 percent in 2011.However, the government said the regions – most of which missed their deficit targets last year – had agreed to cut their spending by 13 billion euros and increase revenues by 5 billion euros.

After weeks of negotiations, Treasury Minister Cristobal Montoro approved the plans presented by every region except for the small northern one of Asturias, which will have to produce a new budget within 15 days. “We’ve taken a fundamental step for Spain’s credibility,” Montoro told a news conference.Overspending by the regions caused Spain to miss its deficit reduction target badly last year. Moody’s agency downgraded on Thursday its ratings of four regions including two of the biggest, Catalonia and Andalucia.

Regions which meet their targets will get help from the state to cover their financing needs through a new mechanism which will be introduced by July. The government has been working for weeks on a new instrument called “hispanobonos” allowing the regions to issue debt underwritten by the Treasury.Spain’s 10-year debt yields have risen back above 6 percent, which investors view as a pivot point that could accelerate a climb to 7 percent, a cost of borrowing widely seen as unaffordable even though Madrid has raised well over half its needs for this year.

Prime Minister Mariano Rajoy said on Wednesday his government could soon find it difficult to fund itself affordably on the bond market unless the pressure eases.However, the government source said the Treasury could refinance itself at the current high yields for several months, although the country saw it aiss vital that funding costs fall.Top of the country’s worry list is a banking sector beset by bad loans, the result of a property boom that bust in 2008.El Mundo newspaper reported that customers at Bankia had taken out more than 1 billion euros, equivalent to around 1 percent of the lender’s retail and corporate deposits, over the past week. The government denied there had been an exit of funds, but the bank’s shares closed down 14 percent on Thursday on top of steep losses over the past week.

“It’s not true that there is an exit of deposits at this moment from Bankia,” said Economy Secretary Fernando Jimenez Latorre. Bankia itself said that deposit activity was normal.The government last week took over Bankia, the fourth-largest lender which holds around 10 percent of Spanish deposits, in an attempt to dispel concerns over its ability to deal with losses related to the 2008 property crash.”The majority of outflows came after the chairman resigned last week, but I think once the bank was taken over by the government, depositors calmed down a bit,” said one Madrid-based trader. “The share price fall has to do with disappointed retail investors dumping the stock.”

Some savers were reassured by the deposit guarantee fund which covers 100,000 euros per customer.”I have two accounts with Bankia and up to now I have not closed them. I’m not even considering it,” said Jose Ignacio Gonzalez, 42. “It must be more secure with the backing of the state, it has a guarantee.”The problem for Madrid is that the property losses which banks face are not yet quantifiable, as prices are likely to fall further.The government told the banking sector last week to set aside another 30 billion euros in provisions, prompting some analysts to say much more would need to be done.

While Greece, facing fresh elections which could hasten its exit from the euro zone, has dominated headlines, uncertainty over the final cost of Spain’s banking reform has raised the prospect that it could also require an international bailout, a bill the euro zone would be stretched to cover.Official data confirmed the Spanish economy shrank 0.3 percent in the first quarter, putting it back into recession. Unemployment is already running close to 25 percent, rising to around 50 percent among the young.

Even if it puts its house in order, Madrid faces the threat of contagion from Greece if it elects an anti-bailout government next month, a move which could hasten a hard default and exit from the euro zone.”It’s not Greece leaving the euro that is the major issue,” said John Bearman, chief investment officer at Thomas Miller Investment, which manages roughly 3 billion pounds ($4.8 billion) of assets. “It’s the domino effect.” – Yahoonews