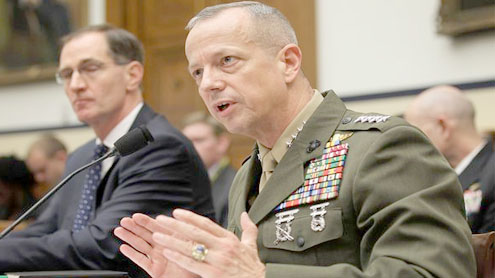 WASHINGTON: Marine Corps Gen. John Allen, the top commander in Afghanistan, is expected to leave his post early next year and take over the U.S. European Command, US media reported on Tuesday.

According to ‘Washington Post’ Allen has spent much of his tumultuous year in Afghanistan helping to negotiate a long-term security agreement with the Afghan government and overseeing the initial drawdown of U.S. forces from the country.He has shifted American troops from a counterinsurgency strategy, with a focus on governance and reconstruction, to a more limited mission of training the Afghan army and fighting the Taliban.

The planned promotion to head the U.S. European Command will allow Allen to remain deeply involved in Afghanistan policy and work with NATO allies who have maintained a presence in the country despite the war’s growing unpopularity in Europe.Defense officials cautioned that the plan could change if conditions in Afghanistan shift. “No final decisions have been made regarding a follow-on assignment for Gen. Allen or the future of European Command,” said Capt. John Kirby, a Pentagon spokesman. If the White House nominates Allen, the general will have to be confirmed by the Senate.

Allen, who had been expected to spend two years in Afghanistan, would leave his post early to take the job as the supreme allied commander in Europe, Defense officials said. Senior Pentagon and White House officials do not want to pull out the top commander in Afghanistan in the middle of the country’s fighting season, which runs from spring through the fall.

Replacing Allen in the winter would give his successor a few months before the start of heavier fighting to learn the territory.Adm. James G. Stavridis, head of the U.S. European Command, has been asked to stay a few months beyond the end of his four-year term so that Allen will have time to return from Afghanistan and prepare for his new command. – Onlinenews