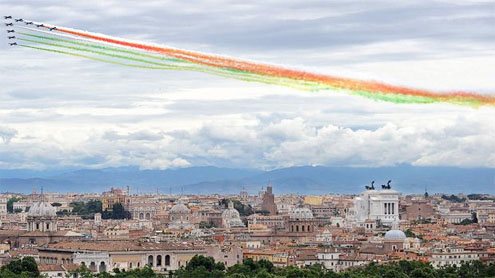 As Greece erupts, Italy is moving into the eye of the storm. Its economy is contracting at speeds not seen since the depths of the slump in 2009 as draconian austerity bites, greatly increasing the risk of social revolt and a banking crisis.

With the world’s third largest debt after the US and Japan at €1.9 trillion (£1.18 trillion), it is big enough to bring the global financial system to its knees. It is also in the front line of contagion as the Greek crisis metastasizes.Yields on 10-year Italian debt jumped 16 points to 5.86pc on Tuesday after Italy’s data agency said the country is sliding even into deeper recession, with GDP shrinking 0.8pc in the first quarter.

Output is now 6pc below its peak in 2008. Italy has been trapped in perma-slump for a decade, the only major state to suffer a fall in real per capita income since 2000.Rising anger has led to a spate of violent attacks by terrorist groups over recent weeks, all too like the traumatic ‘years of lead’ in the late 1970s. The government is mulling use of troops to protect targets after anarchists shot the head of Ansaldo Nucleare last week and hurled petrol bombs at tax offices.

The unelected government of Mario Monti is carrying out net fiscal tightening of 3.5pc of GDP this year even though Italy’s budget is near primary surplus. This is three times the International Monetary Fund’s “therapeutic” pace. All key measures of Italy’s money supply have been contracting at 1930s rates over the last six months. Hans Redeker from Morgan Stanley said the EU’s mishandling of Greece has put Italy in grave danger. “The irrevocability of the eurozone is a valuable asset, and they are throwing it away. Global investors are preparing for the day Greece leaves,” he said.

The IMF said Italian bank exposure to the state is 32pc of GDP, including all forms of lending. “We are looking at this number very closely,” said Mr Redeker. Almost half of this is owed to foreigners. Italy’s central bank owes a further €278bn in ‘Target2′ claims to peers in Germany, Holland, Finland and Luxembourg, reflecting capital flight.Italy’s former premier Romano Prodi said the EU risks instant contagion to Spain, Italy, and France if Greece leaves. “The whole house of cards will come down”, he said.Angelo Drusiani from Banca Albertini said the only way to avert catstrophe is to convert the European Central Bank into a lender of last resort. Otherwise Italy faces “massive devaluation, three to five years of hyperinflation, and unbearable unemployment.”

The ECB’s emergency lending may have made matters worse, encouraging banks to buy their own states’ debt. It has led to an incestous inter-linkange of fragile banking systems and fragile sovereign states, each propping the other up. Many of the banks used ECB money to buy state bonds until they need to roll over their own debt. They are now nursing stiff losses.Moody’s downgraded 26 Italian lenders on Monday night saying the slump itself is the killer, joining a chorus of voices warning that too much austerity may be self-defeating. “Banks are vulnerable to the renewed recession in Italy, given their already elevated levels of problem loans and weakened profitability,” it said. Moody’s expects the economy to contract 1.9pc this year.

The Italian Banking Association ABI accused Moody’s of an “irresponsible, incomprehensible, and unjustifiable” smear. “Moody’s decision is an attack on Italy, its companies, its families and its citizens,” it said, calling on the EU authorities to clamp down “severely” on rating agencies.The agency said the “problem loans” of Italian banks have reached 9.3pc. The figure may be higher, given “concerns about the accuracy of reported non-performing loan measures.” They depend on capital markets for 36pc of their funds. This source of finance has largely dried up. – Thetelegraph