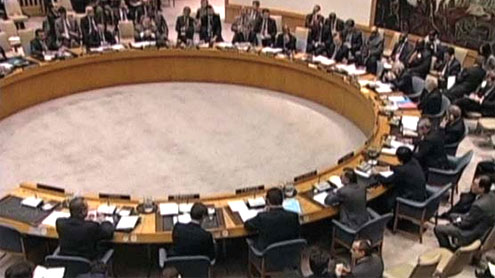 The United Nations Security Council (UNSC) has strongly condemned the attack on a UN peacekeeping base in eastern Democratic Republic of Congo on Monday in which at least 11 Pakistani peacekeepers were seriously wounded.

The 15-member council “reiterated their serious concern about the deteriorating security and humanitarian situation in the Kivus and the impact on the Congolese population.”A crowd surrounded a UN peacekeeping unit in eastern Democratic Republic of Congo on Monday and opened fire, wounding seven Pakistani peacekeepers, UN officials and diplomats said.Other peacekeepers in the contingent were hurt by stones thrown by the 1,000-strong crowd around the base in the Bunyiakiri district of South Kivu province, said UN spokesman Martin Nesirky.

The peacekeepers were Pakistanis, according to diplomatic sources. The wounded men were taken to hospital in Goma, the main city in eastern DR Congo. Pakistan asked the UN Security Council to hold a meeting on the attack and make a condemnation, diplomats said.The crowd was apparently protesting against attacks in the region carried out by Democratic Forces for the Liberation of Rwanda rebels, Nesirky told a briefing.

The UN mission in DR Congo reported that “elements” of a Mai-Mai group, the Rai Mutomboki, “may have been part of the protest and may have fired on the peacekeepers,” Nesirky said. The Rai Mutomboki are an armed self-defense group.”The mission is monitoring the situation and has sent reinforcements to the area, which is now reportedly calm but tense,” the UN spokesman said. – Dunyanews