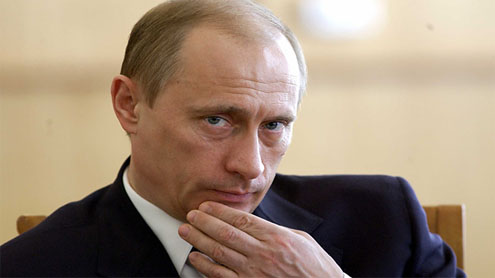 Hundreds of Russian opposition supporters have for a week staged an indefinite sit-in protest in central Moscow against Vladimir Putin’s rule, a sight unprecedented in his 12 years of dominance.

The activists set up camp in the Chistye Prudy district, one of the most prestigious areas in the capital, on May 8 two days after police cracked down on a mass protest against Putin’s inauguration as president on May 7.While Moscow has seen repeated opposition protests against Putin since December’s disputed parliamentary elections, never before has the opposition spent nights out in the street and refused to budge.

And despite the strong-arm tactics used against the protest on May 6, police have so far tolerantly watched over the sit-in, with the relatively few officers present showing little sign of moving in to disperse the action.Each evening, the numbers present swell as activists take part in activities like lectures and play readings. Some then leave but others spend the night in the open, taking care not to disturb residents of the district.

There are strictly no placards with political slogans, no megaphones but small groups of people who talk away animatedly. Mini-conferences are organised on “How to resist dictatorship” and “What are the police for?”There is some degree of sophistication — leaders have walkie-talkies while a generator has been installed so activists can ensure power for their smartphones and computers which they see as key weapons in the battle.The focus of the camp is a statue at Chistye Prudy of the 19th century Kazakh poet and philosopher Abay Kunanbayuli, a monument that until now has gone almost unnoticed by most Muscovites.

In a nod to the “Occupy Wall Street” movement in the United States, the action has become known as “Occupy Abay”.“We will resist as long as we are not chased away,” said Sergei Kozkovsky, 29. “And if we are chased away will go somewhere else,” added Maxim Katz, 27.Camp rules are pinned up to a tree: no alcoholic drinks, courteous relations with the police and respect for the environment. The most committed come with a sleeping bag and mattress to spend the night.There are improvised concerts, readings of poetry like the verses of the late dissident Joseph Brodsky or songs by the Soviet-era rebel rocker Viktor Tsoi including his legendary anthem “We Want Changes”.

Others spend the time uploading pictures of the action on to Facebook and tweeting the latest news. One man performed yoga with his legs crossed and eyes shut.“It’s a success. This would have been unthinkable just six months ago,” said Katz, who is already serving on the municipal council of a Moscow district.“They do not need leaders and orders from on high. This will prepare them to launch themselves into local politics,” he added.He has launched an initiative called “come with your mum and grandma” to bridge the gap with generations who tend to be more suspicious of the opposition movement than the young.

The protest has been given an extra impulse by the 15-day jail terms given to the main leaders of the anti-Putin protest movement, Sergei Udaltsov and Alexei Navalny, both of whom have urged civil disobedience as a tactic.Putin’s spokesman while he was prime minister, Dmitry Peskov, told Afisha magazine in an interview published online on Friday that he was sure the police would break up the protest.“Of course (they will). It is illegal after all,” he said.But on Sunday, the sit-in was the focus of a march of thousands of opposition supporters led by well known writers including the best-selling detective novelist Boris Akunin. The protest passed off peacefully. – Khaleejnews