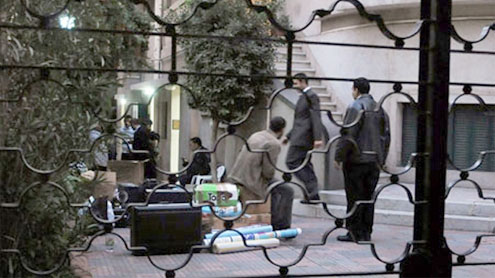 Egyptian police raided the Cairo office of Iranian television channel, Al-Alam, confiscating its equipment after it was found to be operating without license, a security source said on Monday.

The raid was carried out on Sunday and the head of Al-Alam’s Cairo office, Ahmed Sioufi, was charged with working without an official permit, the source said.On the Arabic-language channel’s website, Sioufi confirmed that “several members of the police raided the office of Al-Alam” in Cairo.He slammed the raid as an “attack on freedoms, a means to silence” the media, adding that the channel had repeatedly requested an official work permit.

It was the second time the station had been raided. In July 2008, the channel also had its equipment confiscated after it failed to get permission to broadcast from Egypt.Dozens of journalists, including Al-Alam staff, protested against the move outside the journalist’s syndicate in Cairo, an AFP photographer said.Following the Islamic revolution in Iran, Tehran severed diplomatic relations with Cairo in 1980 after Egypt’s signing of the 1979 peace agreement with Israel.

Egypt’s toppled president Hosni Mubarak harboured strong distrust of Tehran, regarding it as a destablising element in the Middle East.Since his ouster in a popular uprising last year, Cairo and Tehran have made efforts to normalise diplomatic relations, with little success.