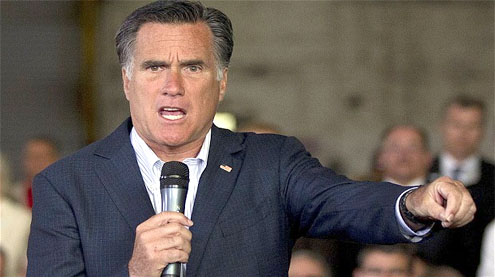 Mitt Romney spearheaded a Republican challenge to Barack Obama’s backing of same-sex marriage over the weekend, as the party’s Right wing urged him to use it as a “weapon” to unseat the President.

As polls indicated that Mr Obama’s new stance on the issue may hurt more than help him electorally, his presumed Republican opponent launched a vigorous defence of the traditional American family.“Marriage is a relationship between one man and one woman,” Mr Romney told students graduating from Liberty University in Virginia. “Culture matters,” he said.The former Massachusetts governor pointed to statistics showing that Americans who married, finished school and found a job before having children were much less likely to end up in poverty.

His remarks came as a Gallup poll found twice as many voters said they were less likely to vote for Mr Obama than were more likely to after his declaration last week that gay people should be allowed to marry. Six in ten said that it would not sway their vote, however.Rick Santorum, the hardline Roman Catholic former senator who was defeated by Mr Romney in the party’s presidential primary, urged his former rival to capitalise aggressively on the President’s newly liberal position. “This is a very potent weapon for Governor Romney if he’s willing to step up and take advantage of a president who is very much out of touch with the values of America,” Mr Santorum told a radio interview. Reince Priebus, the Republican party chairman, said yesterday that allowing homosexuals to marry was not “a matter of civil rights”.

Meanwhile Rand Paul, a Kentucky senator and the son of the Republican presidential challenger Ron Paul, said of Mr Obama: “I wasn’t sure that his views on marriage could get any gayer.” Some 23 per cent of independent voters, whose ballots are expected to be decisive in November’s general election, told the Gallup survey that they were now less likely to vote for Mr Obama, while 11 per cent said that they were more likely to back him.Mr Romney proposes amending the US Constitution to outlaw gay marriage forever. Republican strategists believe that his sharp opposition to Mr Obama’s position could hand him a prime opportunity to energise the party’s Right-wing “base”.

Many conservative voters remain sceptical of Mr Romney, a former management consultant and private equity executive, because of moderate positions he took on social issues while running for office in liberal-leaning Massachusetts.Mr Romney also made a rare reference to his Mormon faith during his Virginia speech, which took place at an evangelical college where students are taught that the Church of Jesus Christ of Latter-Day Saints is a “cult”.Acknowledging that “people of different faiths, like yours and mine, sometimes wonder where we can meet in common purpose,” Mr Romney suggested Mormons and mainstream Christians held “shared moral convictions about our nation”.

The speech redoubled his effort to portray his campaign as a bastion of traditional family values, releasing an extended video clip of his five sons paying tribute to his wife, Ann, to mark Mother’s Day in the US.“When all is said and done, there’s nothing more important than our families,” Mr Romney said. “I’ve been blessed with a wonderful one.” Mr Obama — who today delivers a graduation speech to an all-women’s university in New York — released his own clip, which highlighted advances in women’s rights during his first term. – Thetelegraph