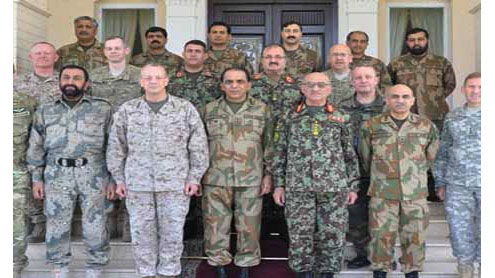 ISLAMABAD: The commander of Nato-led forces in Afghanistan met Pakistan and Afghanistan army chiefs on Sunday for talks on border security, almost six months after US airstrikes killed 24 Pakistani soldiers.

The November 26 airstrikes along the Pakistan-Afghanistan border provoked a major crisis in Pakistani-US relations.Pakistan retaliated by shutting its Afghan border crossings to Nato supplies – and the frontier remains closed.But in a sign of easing tensions, US General John Allen, Pakistani army chief General Ashfaq Kayani and Afghan army chief General Sher Muhammad Karimi led their respective delegations at talks Sunday in the garrison city of Rawalpindi, near Islamabad.

“Talks focused on border control measures, and mechanisms put in place to avoid untoward incidents on both sides of the Pak-Afghan Border,” a Pakistan military statement said.The talks are the most significant Pakistan has hosted with the international military alliance and the Afghan military for a year.On Saturday Allen held preliminary talks with Kayani on how to improve security in volatile areas bordering the two countries.

Pakistani leaders are also scheduled to meet next week to discuss ending the nearly six-month blockade on Nato supplies into Afghanistan.Prime Minister Yousuf Raza Gilani will convene the meetings which will also debate how to repair relations with the United States in time for a key Nato summit later this month.Diplomats on both sides have been keen to resolve the impasse between Islamabad and Washington before the Nato summit on Afghanistan in Chicago on May 21-22.