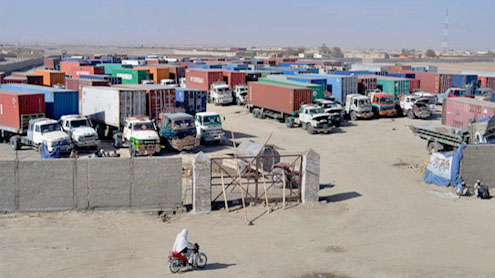 WASHINGTON: Following the closure of NATO supplies by Pakistan in retaliation to the killing of its 24 soldiers in a cross border fire by US/NATO troops, the use of northern distribution network is costing US an additional $38 million per month, a US senator has said.

“We have learned the Department of Defence will face at least a $1.3 billion bill as a result of the rise in fuel prices. This price increase has been exacerbated by the continued closure of the Pakistan border, forcing supply convoys for our force in Afghanistan to use the northern distribution network at an increased expense of about $38 million per month,” Senator Claire McCaskill said at a Congressional hearing on current readiness of US troops, on Thursday.

McCaskill responding to the concerns of US lawmaker, General Philip Breedlove, vice chief of the air force, cautioned about the additional financial burden the US forces might have to face if Pakistan does not reopen the ground lines of communications (GLOC). The US forces use the northern distribution network for the transportation of goods to Afghanistan after Pakistan shut down the GLOCs.

“If we do not get movement in the Pak GLOCs — as you know, much of the job of bringing home all of the equipment that the marines and the army need will fall to the backs of the air force to haul out. And so there’ll be a considerable amount of time as we effect this retrograde, especially if it is increased by the air, before the air force will even begin to begin its retrofit and refit,” he said.“So our start time could be significantly different than what you heard from my compatriots, and it will take us some period of time, between a year and a year and a half after that, to get through the training cycles and things we need,” he said.

“It is relevant, obviously, to the drawdown as we pull equipment and men and women out of Afghanistan. It’s obviously very important in terms of fuel costs. It is a huge bill that we — I think people forget that nobody buys more fuel in the world than we do. And when it’s expensive, it really is a gut punch to the budgets of our military,” McCaskill said.“I know that we have to pay almost three times the normal rate to go through the northern distribution network that we would have to typically expend going through Pakistan.

What effect is this closure going to have on getting equipment out, getting everything out we need to get out, and more importantly, on getting the fuel in, we need to continue to support the mission that we have ongoing in Afghanistan?” he asked. Breedlove said the re-price on fuel is going to cost the US air force approximately $1.3 billion that was not in their original plan.“Second of all if the Pak GLOCs do not open and we cannot count on the flow that was planned for that when we originally budgeted for our fuel for this next year, and now we have to increase the amount of fuel we use to begin to fly out much of this retrograde by air, that will again be an unplanned OCO bump in fuel requirements to the Air Force,” the US Air Force commander said.

“I think a lot of Americans don’t understand that the stresses with Pakistan have many implications, and it is not just the direct implication of are they our friend, are they our enemy, what exactly are they and who can we trust within Pakistan. But it has a dramatic impact on the budgets of our military as it relates to operational requirements in Afghanistan and drawdown in Afghanistan,” McCaskill said. – PT