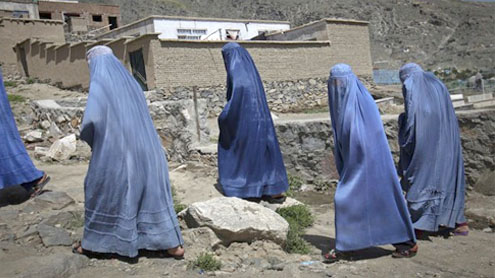 WASHINGTON/KABUL: Shortly after sending U.S. troops to Afghanistan in October 2001, President George W. Bush focused so intently on freeing Afghan women from the shackles of Taliban rule that empowering them became central to the United States’ mission there.

More than a decade later, as his successor Barack Obama charts a way out of the unpopular war, Afghan girls are back in school, infant and maternal survival rates are up and a quarter of the parliament’s seats are reserved for women who at least on paper have the same voting, mobility and other rights as men.But Obama rarely speaks about that progress, delegating discussion of women’s rights to his secretary of state and other top diplomats so he can focus on narrower goals for Afghanistan: uprooting the militants there and getting out.

Obama’s lack of overt attention to Afghan women has led many to fear their hard-fought gains will slip away as the United States hands off security responsibility to Afghan President Hamid Karzai, with ever-present Taliban leaders still holding sway in much of the countryside.Women’s issues are not on the formal agenda at the NATO summit the United States will be hosting in Chicago later this month. Afghanistan is poised to send an all-male delegation.

Suzanne Nossel, executive director of Amnesty International USA, said it was “really worrying” that Obama only made a passing reference to women on his trip to Afghanistan last week, when he affirmed a general need “to protect the human rights of all Afghans – men and women, boys and girls.”Obama’s choice of words also was noticed in Afghanistan, which remains a conservative and male-dominated Islamic country. Gulalai Safi, a female member of parliament from northern Balkh province, said it was “somewhat of a shame” that he did not use the visit to underline women’s rights.

Amnesty is calling on Obama to spell out a plan to preserve the gains for women since the fall of the Taliban, which from 1996 to 2001 barred Afghan girls from schools and kept women from working and from leaving their homes unless they were accompanied by a male relative or spouse and were covered in a head-to-toe burqa.For more than a year, the White House has been pursuing, with little success, reconciliation talks involving the Islamist group that could give it a share of power in Kabul.

“When you are negotiating with the Taliban, ensuring the rights of women is not a simple matter,” Nossel said. “In that sense you can understand why they are not talking about it but that is why it is doubly worrying.”

Bush did not mention Afghan women when he launched the war a month after the September 11, 2001, attacks that were orchestrated by al Qaeda militants based in Afghanistan.But he soon broadened his rhetoric, saying that empowering women was essential to strengthen Afghan society and prevent al Qaeda from keeping a foothold there.His wife, Laura Bush, also made Afghan women one of her signature issues. In November 2001 she delivered the weekly presidential radio address “to kick off a worldwide effort to focus on the brutality against women and children by the al Qaeda terrorist network and the regime it supports in Afghanistan, the Taliban.”

The former schoolteacher visited Afghanistan three times to support educational projects and efforts to tackle infant and child mortality rates, then the highest in the world next to Sierra Leone, and to inform women about their legal rights.”Her effort really helped to sell to the American people why we needed to do what we were doing,” said Anita McBride, former chief of staff to Laura Bush.Today’s White House has a more limited definition of that purpose, one that eschews his predecessor’s “nation-building.”

In February, White House spokesman Jay Carney stated that U.S. troops were in Afghanistan to root out al Qaeda militants and their training camps, accusing the previous administration of adopting a mission was “muddled and unclear.”The Obama administration says women’s rights remain an important goal, even if not the focus of its public rhetoric.”That refocusing of our efforts is reflected in our public messaging. When we talk about the U.S. mission in Afghanistan, you will hear us speak to that core goal,” said Caitlin Hayden, a National Security Council spokeswoman. But she said there was “absolutely no lessening of our attention or support to Afghan women from this administration.”

Gayle Tzemach Lemmon, an Afghanistan expert with the Council on Foreign Relations, said the American public was so tired of the war that today’s White House was reluctant to dwell on what is at stake with the U.S. departure.”Now the question is how to get out, not to explain why we got in,” Lemmon said. But she stressed the risks of seeing women “as a pet project instead of a barometer for the society’s health.””How the war ends really does matter. The question is, will a Somalia be left behind in Afghanistan? And if it is, women will be the first to suffer,” she said.

Obama often jokes that he is surrounded by women, sharing the White House with his wife, two daughters and mother-in-law and working closely with female advisers and cabinet members including Secretary of State Hillary Clinton.He created the first White House Council on Women and Girls shortly after taking office to make sure the U.S. government “considers the needs of women and girls in every decision we make.” In December he signed an executive order and action plan telling U.S. diplomats to work to empower women as “equal partners” in conflict prevention and peace-making.

But neither he nor first lady Michelle Obama has used their tremendous attention-generating power to stress the needs of women outside the United States, including in Afghanistan.That work has mainly been left to Clinton, herself a former first lady, who has visited Afghanistan three times as the United States’ top diplomat. Melanne Verveer, U.S. ambassador-at-large for global women’s issues, has been to Afghanistan twice.In an interview, Verveer acknowledged the American public had lost track of the advances for Afghan women amid “discouraging” headlines about acid attacks on girls in school and violence against women that the United Nations has said remains at “near-pandemic levels.”

“But it is important to see just so much has been achieved, that there should not be a reversal in the investments and the progress that has been made, because that would be to the detriment of Afghanistan’s future,” she said.Asked why Obama has not spoken more directly about the need to protect Afghan women, Verveer said the president had made clear he wants U.S. diplomats and military personnel to focus on women’s issues on the ground as they prepare for the transition.

In the talks with the Taliban, which are currently suspended, the White House has said it would only accept a reconciliation deal that requires respect for the Afghan constitution, which codifies equal rights for men and women.But in Afghanistan, many women fear that Karzai could trade away their freedoms as he seeks to curry support in conservative parts of the country, including in rural areas where female illiteracy remains above 90 percent and child marriages are still widespread despite being illegal.In March, Karzai backed recommendations from powerful clerics to segregate the sexes in the workplace and allow husbands to beat their wives under certain circumstances. Last year he sacked the deputy governor of southern Helmand province after two women performed without headscarves at a high-profile concert.

“This is a green light paving the way for extreme figures, including the Taliban, to come forward,” said Fawzia Koofi, a female member of parliament who has said she plans to run in the country’s 2014 presidential elections.Senior Afghan peace negotiators have said the Taliban is now willing to soften its hardline ideology to regain a share of power. But a spokesman for the Taliban, Zabihullah Mujahid, said this week that “it is too early to discuss” whether the group now supported girls’ education.Another Afghan lawmaker, Shukria Barakzai, said the shift in attention from the White House had decreased the pressure on Afghan leaders to take the status of women seriously.

“We are now getting the sense that in order to achieve women’s rights, we have to act alone … We feel like we have no support,” said Barakzai, who met Laura Bush during one of her trips to Afghanistan.On a trip to Washington, Afghanistan’s health minister Suraya Dalil said women in the country were ready to stay politically active to prevent backsliding in health and other areas with the political changeover.

Kabul is now full of beauty parlors for women, unheard of during Taliban times, and girls in their white hijab and black uniforms are seen going merrily to and from school every day.But there has been a dramatic spike in reports of violence against women, and very few perpetrators are getting punished for crimes including beatings, torture and brutal killings.Over the past year, the volunteer group Young Women For Change glued more than 700 posters around Kabul showing a woman’s veiled face that read: “don’t grab my hair/don’t throw stones in my face/I can stand on my own two feet/I can build this country with you together.”Almost all the posters were torn down within days. – Yahoonews